Award motivations
The sequence alternates situations of powerfull action and images of very emotional impact, that give the intimate stories of people who had to deal with the events as much as the documentation of the places.
The tragedy of a civil war is told with absolute stylistic uniformity thorugh picture that will make the viewer dive in the drama.
Pictures with an high journalistic value tell the conflict and the total involvment of the Syrian society in all its component.

Listen to the phone call to Fabio Bucciarelli for the award communication (ITALIAN LANGUAGE):

Audio clip: Adobe Flash Player (version 9 or above) is required to play this audio clip. Download the latest version here. You also need to have JavaScript enabled in your browser.

In the wake of the Arab Spring, in March 2011 public demonstrations against President Bashar al-Assad begin in Syria. The protest aims to lead the Syrian President to implement the reforms needed to give a democratic State. The government’s reaction is carried out by deploying armed forces to suppress the rebellion in blood. Within a short time the clashes erupt all over the country and result in a civil war, an ongoing conflict that sees the government’s forces opposed to the Free Syrian Army coalition. 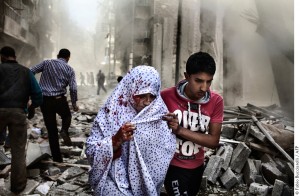 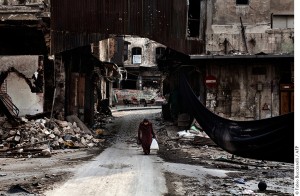 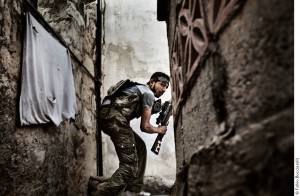 During the summer of 2012, after more than a year of conflict, the bloodiest battle reaches Aleppo, the largest Syrian city become a stronghold of the revolutionary forces. The battle for the conquest of the city becomes a real massacre: everyday the revolution fighters, only armed with Kalashnikov, face the loyalist army and its tanks and airplanes.The media interest does not do justice to what is happening since more than two years in Syria: unlike Libya, the lack of oil resources and the games of the Great Powers make the International Community just a spectator of people who fight alone against their President.  The war is still going on and the number of dead, according to the United Nation, reaches more than 100,000. The photos are taken between October and November 2012 in Syria. For the entire period I lived with the FSA fighters reporting the strong reality of this conflict. The images try to describe the cruelty of war and its effect on the civilian population. From mid-july 2012 the Free Syrian Army fights for the control of the northern city of Aleppo. President Bashar al-Assad tries to regain command of the city using all kind of weapons, turning the war into a massacre for the civilian population. 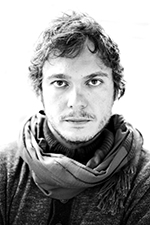 Fabio Bucciarelli (Italy, 1980) is a documentary photographer who focus his attention on conflicts and humanitarian consequences of war. Fabio spent the latest years covering the major world changing events in Africa and Middle East. He reported from Libya from its earliest stages until the death of Gheddafi, from Syria during the civil war and from forgotten countries in Africa as South Sudan and Mali. He feels the urgency to tell the stories of people who are rendered powerless and  provide unbiased information focused on human rights.

Before becoming a photographer, in 2006, Fabio received the MS in Engineering from Politecnico of Turin. After, he attended the Universidad of Valencia where he specialized in Digital Imaging. From 2009 he devoted himself entirely to photography and started working as staff member for La Presse/Ap. A couple of years later, he leaved the agency to dedicate his attention fully to Documentary Photography. He collaborates with AFP, LUZphoto and with different NGOs.

In 2013 his project on Syria won the Robert Capa Gold Medal awarded by the Overseas Press Club of America, the prestigious award that recognizes the best published photographic reporting from abroad, requiring exceptional courage and enterprise. He has also been awarded by World Press Photo,  Pictures of The Year,  SONY World Photography Organisation and FotoEvidence Book Awards.

Beside all this, he wrote the book “The Smell of the War” on the Libyan Conflict.