Jeddah Diary is an exploration into the complicated and contradictory world of Saudi Arabian women as they balance between modernity and tradition. 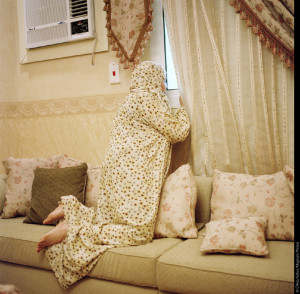 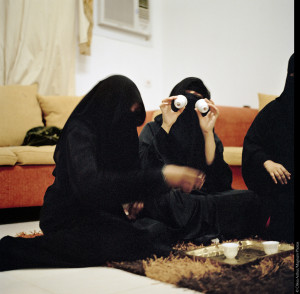 Through a selection of photographs and anecdotes, Jeddah Diary opens up the strange and paradoxical world that Saudi girls inhabit. Hidden behind high walls, shrouded in the ubiquitous abaya, Olivia finds a world inside the bubble that is not as conservative as it might seem. But social interaction is complicated, behaviour is carefully matched to place and circumstance, identities need to be protected and cameras are almost always unwelcome. With glimpses into a world that is normally tightly sealed from the eyes of outsiders, Jeddah Diary is a reflection on the nature of privacy and the delicate line between what you are allowed and not allowed to see.

Originally invited to Jeddah to teach a workshop for local women photographers, she soon struck up friendships and returned to the country several times to photograph.

‘I tried to piece together an understanding of the bubble-world that they live in and the strict rules they abide by. But the more I saw the less I seemed to understand, as rules changed from one situation to another and things began to seem contradictory.’

‘Sometimes I took pictures of the girls and was later asked not to show their identity. I made little prints and rephotographed them letting the flash reflect and partially obscure their faces. “That’s great” they said “but couldn’t you show a bit more of her eyes so that people can see how beautiful she is?”’.

Olivia Arthur was born in London and grew up in the UK. She studied mathematics at Oxford University and photojournalism at the London College of Printing. She began working as a photographer in 2003 after moving to Delhi and was based in India for two and a half years.

In 2006 she left for Italy to take up an artist residency at Fabrica, during which she began working on a series about women and the East-West cultural divide. This work has taken her to the border between Europe and Asia, to Iran and to Saudi Arabia. She has received support from the Inge Morath Award, the National Media Museum, OjodePez-PhotoEspana Award for Human Values. In 2010 she received the Vic Odden Award given to ‘a notable achievement in the art of photography by a British photographer under the age of 35′.

In 2008 she joined Magnum Photos as a nominee and in 2013 she became a full member. In 2010 she co-founded Fishbar, a space for photography in London with Philipp Ebeling. Her first book Jeddah Diary, about young women in Saudi Arabia, was published in 2012.