On 29 December 1890, the US 7th Cavalry surrounded a Sioux encampment at Wounded Knee Creek in South Dakota and massacred Chief Spotted Elk and three hundred prisoners of war.
After the so-called battle, some twenty Congressional Medals of Honor were awarded.

Today the Oglala Lakota live in the shadow of Wounded Knee on the Pine Ridge Indian Reservation. 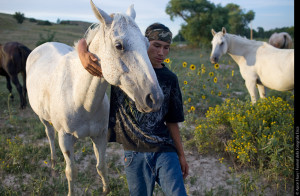 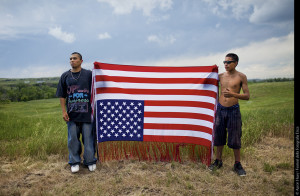 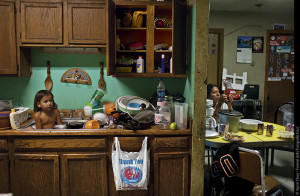 I started photographing on Pine Ridge in 2005 as part of a story about poverty in America. In the beginning, it was all just statistics: a 90 per cent unemployment rate, a 70 per cent school dropout rate and a male life expectancy of forty-seven years. Over time, it became clear to me that these statistics came from a deep historical wound. And then my photographs of Pine Ridge became a story about a prisoner-of-war camp, a story about genocide, a story about stolen lands.

11 years after beginning this project, the story and my relationships on the reservation are more complex than ever. The story has evolved to be about my family, about the people who call me brother and nephew and uncle.

‘Mitakuye Oyasin’, translated into English, means ‘All my relations’. The Oglala Lakota say this at the beginning and at the end of ceremonies. One of my brothers, Andrew Ironshell, says it means ‘a responsibility, almost a call to action, or an acknowledgement that you are a relative to the land, and to the environment and the human beings around you’.

I have stumbled into something sacred on Pine Ridge. I don’t know which part is the ceremony. I think, maybe, it is the whole thing. 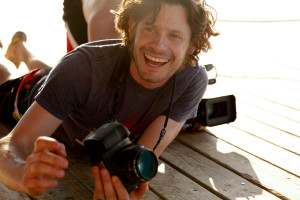 Aaron Huey is a National Geographic Photographer and a Harper’s Magazine Contributing Editor.

His stories from Afghanistan, Haiti, Mali, Siberia, Yemen and French Polynesia (to name just a few) on subjects as diverse as the Afghan drug war and the underwater photography of sharks, can be also found in The New Yorker, National Geographic and The New York Times.

Huey is widely known for his 3,349 mile, solo walk across America (with his dog Cosmo). The 2002 journey lasted 154 days. There was no media coverage. Carrying only one camera and lens Huey documented the places and people they met along the way.

Following the walk Huey took a 2 1/2 year hiatus from shooting photos to build an artist in residence program (Hueyhaus), from the ground up, on the Pecos River east of Santa Fe.

Aaron Huey declares: “My success is not measured in money. I have no financial security, I have no savings account. I measure my success by asking myself if I’m telling a story that the world needs to hear, if I am educating people.”

His list of publications and awards is very long and among them: PDN’s 30 Emerging photographers in 2007, POYi Award for Feature Single in 2009, World Press Award Contemporary Feature in 2013, Independent Publisher Book Awards in 2014.

His work has also been exhibited at the Festival of Perpignan in 2007 and 2012.  It is also represented by Fahey/Klein Gallery in Los Angeles.