Following the spiral of violence and poverty hitting the Central American nations of Nicaragua, Honduras, El Salvador and Guatemala the number of orphaned, abandoned and vulnerable children is constantly increasing. Nuestros Pequeños Hermanos™ (NPH), which in English means “Our Little Brothers and Sister”, provide a permanent family and home for them. Boys and girls are raised in a loving environment, secure in the knowledge they will never be forced to leave the Home, separated from their siblings, nor given up for adoption. In addition to food, clothing, shelter, medical care and a good education, the children spiritual and emotional needs are nourished, empowering them to be adults able to break the cycle of poverty, once their destiny. 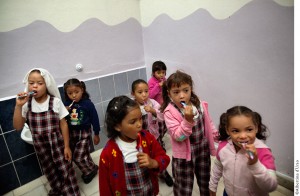 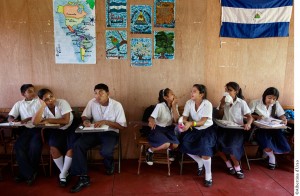 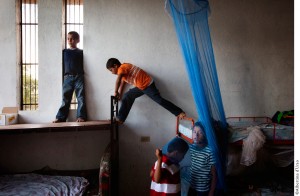 N.P.H. was founded in 1954 by Father W. Wasson in Mexico. Since then, Homes have been built also in El Salvador, Honduras, Haiti, Nicaragua, Dominican Republic, Guatemala, Bolivia and Peru, which over time have saved, welcomed and raised thousands of children.

Each Home is unique and special but they all offer in the same way love and security, giving importance to education and teaching the values of sharing, work and responsibility. Education is a priority and is one of the most important tools that N.P.H. can offer to children to break the cycle of poverty that surrounds them, helping them to become independent adults.
The assistance to the children is provided by local collaborators called “tios” , which means “Aunt” and “Uncle” and by volunteers from all around the world.

N.P.H. Homes are like a miniature village or rather a “campus” recreating the environment and the atmosphere of a real, broad family: there are many small houses where children in groups by age and sex, eat and sleep, schools also opened to the children of the poor surroundings, the hospital or medical clinic, a church, a farm and crops for their livelihood, a football field or basketball court, the cemetery.

In 2012 Albertina D’Urso, during her trip across Latin America countries, has visited some N.P.H. Homes:

N.P.H. Honduras. Rancho Santa Fé: 400 hundred boys and girls make their home in this vast wooded oasis in the hills while an additional 100 youths study and live in the capital, Tegucigalpa. The home operates a Montessori-based preschool and elementary school, junior high school and vocational workshops. Each student is required to take courses in a specific trade as well as a life skills/home economics classroom for all students to learn the basics that will help them succeed in their personal lives.

N.P.H. Guatemala. In 2000, Casa San Andres opened its doors to impoverished children from the community to offer educational scholarships. The program has been so successful that the home now has over 300 external students. Apart from the school campus, there are dormitories for the children who permanently live at the home, kitchen and common dining room, library and a computer room.

N.P.H. El Salvador. Currently 348 children and youths live in the Sagrada Familia home or in the high school and university student homes in Santa Ana.

Fondazione Francesca Rava – NPH Italy Onlus would like to thank Albertina D’Urso for her time and professional contribution, for her non stop friendship and loving support to the children of NPH, in Haiti and other poor countries in Latin America. 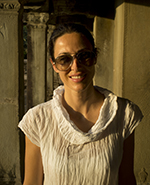 Italian photographer Albertina d’Urso (Milan, 1976) focuses mainly on social and humanitarian reportages. Her dedication to this kind of issues begun in 2004 when she went to Mumbai to help a charity: her work gave life to a book, Bombayslum, published by Skira, and an exhibition at “Libreria degli Atellani “in Milan and deeply changed her life and her career.

In 2006 she participated to the “Kabul mission of the municipality of Milan“, In 2007 she won the “Canon Young Photographers Award” with her project “Welcome to Compton“, a reportage about gangs and violence in Los Angeles.  In 2008 she exhibited “Spirit of Shekhawati” in Trento, Milan and Rome and was awarded at the festival “Orvieto Fotografia“.  In 2009 Albertina exhibited her work “Bodies for sale, Mumbai” in Insa Art Center in Seoul and in Rivus Gallery in Incheon, participated to the traveling exhibition “Abruzzo 2009”, about the earthquake occurred in April, and was among the nominees for the New York Photo Awards. Her book “TI MOUN YO, children of Haiti”, realized for BoFondazione Francesca Rava – NPH Onlus and published by Contrasto was presented with an exhibition in “Forma, Centro Internazionale di Fotografia” in Milan; and while the exhibition continued to travel the book was voted “documentary book of the year” at the “International Photography Award.“The following year a picture of hers from Haiti won the second prize at the “Lens Culture International Exposure Award” and participated to the connected exhibition at 291 Gallery in San Francisco, at Speos Gallery in Paris and at VII Gallery in New York.  Again in 2010, with her work “Nehru Nagar”, Albertina was among the finalists of  the “Deeper prespecive photographer of the year” at the Lucie Awards. Her project “Haiti’s generation of amputees”  was exhibited in 2011 at “MIA- Milan Image Art Fair” and “Festival Fotografico Italiano” in Busto Arsizio. In 2012 she participated in the “New York Photo Festival” with the project “From dust to god” and to the “Angkor Photo Featival” with “Out of Tibet”. Her work is regularly featured in magazines like Vanity Fair, Marie Claire, Panorama, L’Espresso, IL, Foto8, Vision, Burn, Private.

Fondazione Francesca Rava – N.P.H. Italia is an independent, non political, charitable non profit foundation whose mission is to help children in serious need, in Italy and worldwide. The Foundation represents in Italy N.P.H. (Nuestros Pequeños Hermanos – Our little brothers and sisters) a charitable organization for orphaned and abandoned children in Latina America, founded in 1954 by Father William Wasson, from Phoenix, Arizona. In 60 years, more than 25,000 orphaned and abandoned children have been saved, nourished, raised with love and educated in the N.P.H. orphanages in Mexico, Haiti, Guatemala, Honduras, Nicaragua, El Salvador, Dominican Republic, Peru and Bolivia.

The foundation was born in the name of Francesca, a young woman who suddenly died fourteen years ago in a car crash, and after her sister Mariavittoria, a lawyer, met N.P.H. and decided to dedicate her life to help children.

Fondazione Francesca Rava – N.P.H. Italia’s activities include children sponsorship, fundraising projects, volunteers and educational programs. In 13 years an outstanding amount of projects were supported from Italy, accomplished in Haiti and in other countries in Latin America to support N.P.H. children.