Following the coup that toppled President Bozize, the Central African Republic is mired in a war that no one seems able to stop. The country is collapsing: 750,000 internally displaced persons, 250,000 refugees out of a population of no more than 4 million. The reports of Amnesty International and the International Red Cross denounced daily atrocities, often committed against defenseless civilians. Joanne Lui, president of MSF International, speaks deliberately of mass catastrophe , pointing the finger at the dramatic slowness of the international response. 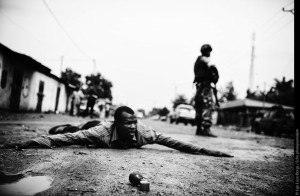 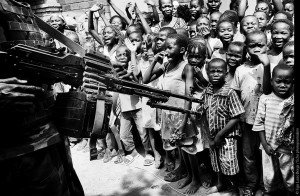 Militias dictate the only law remained: that of the machete. In the country ther’s significant presence of heavy weapons, mortars, hand grenades, anti-tank and anti-personnel mines expecially from China. The French troops of Sangaris operation and the soldiers of the African Union do not control either the main director of the country. Tons of humanitarian aid are rotting in the sun in Cameroon. In the city there are fighting every day, and every night. The international press takes up little of the armed conflict, declassified in general religious war between Muslims and the Christian militias Seleka Anti-Balaka. The truth is otherwise. President Bozize tries, in the months before the conflict, to renegotiate the rights of exploration and exploitation of mineral resources in China’s favor. The French government, ruled by the play, leaving the Central African leaders, allowing the chadian president Djeby to support Seleka rebels that come in a few days in the capital, Bangui, and proclaim the president Muslim Djodota. Seleka militias, formed by Sudanese and chadian muslim mercenaries, indulge in violence and looting. Like usual, this religion war hides a big business. 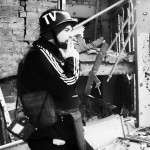 He has reported extensively from countries such as Syria, Lybia, Somalia, RDC, RCA, Rwanda,  Kosovo, Mali, Guinea, Sry Lanka, Indonesia, covering, among others, the Arab Spring, the civil war in RDC, RCA, Somalia, Lybia, Syria, and the religious clashes emergency in Northern Lebanon. In 2009, his exclusive feature documentary on the Somali war appeared on Channel 4.

He received the first prize at the 2011 Novinarska Cena journalism award for a series of stories on rebels during the Libyan war.

Amici per il Centrafrica is a laic Onlus formed in 2001 to express a responsible participation and solidarity with those who live in poverty.

We believe that the improvement of the living conditions of the world population is the responsibility of all. The rise and falling the limits of development of a people must go through a process of awareness to the opportunities that exist.

The commitment of our association takes shape alongside the efforts made by missionaries in favor of marginalized communities in the Central African Republic and in the poorest countries of Sub Saharan Africa by offering them education, health, employment support and training to reach the full indipendence.

Health emergencies, widespread poverty, due to political, social and structural instability, and the lacking attention to the minorities defence, do not allow the people of the Central African countries to build a solid foundation on which planning a future. We intend, therefore, to express a responsible participation and solidarity to the needs, the disadvantages and the hopes of those who live in poverty.

Training and education, the right of health, alongside development programs of independent production activities are interventions that we believe will help these people to become aware and to move towards a condition of life better than the present.

Our commitment in the countries of Central Africa is realized in the institutionalization of educational structures that allow literacy and schooling of many children, in the creation and development of health facilities that promote the improvement of health status, in starting economic projects to agriculture and manufacturing development.