This exhibit carves a path articulated in different sections, dedicated entirely to Turkey. It retraces some of the most important and dramatic events that have taken place in the country over the past few years.
Those same events have catalysed the interest of national and international media for years, such as the Taksim Square riots in March 2014 and the tragic collapse of a coal mine in Soma, a city in the western province of Manisa, in May of the same year. 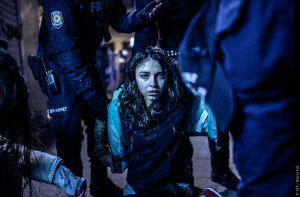 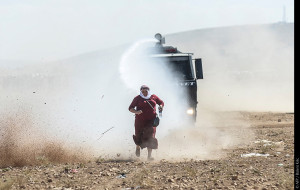 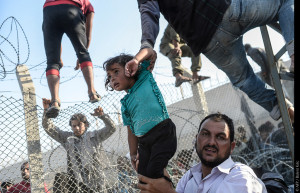 An exhibit path that, picture after picture, reportage after reportage, takes the shape of a real and actual journey, aimed at bringing the visitors to the heart of the country and to its farthest and most tormented borders.

It is along the Turkish-Syrian border that one of the greatest tragedies of the past decades is taking place. The eye of the young Turkish photojournalist was there to bear witness to the course of events and consign it to history.

In June 2015, during the hottest day of the battle between Syrian Kurds and ISIS, Kilic documented the escape of thousands of Syrians from the city of Tell Abyad, the epicentre of the fighting. Many among them tried to enter Turkey through a border passage in Akcakale, a city in the province of Sanliurfa, but the Turkish authorities had already closed the border in an attempt to limit the exodus.

The Syrian refugees were stuck between two extremes, literally trapped between two countries. But the barbed wire cannot do anything to stop the survival instinct.

“In less than 10 minutes about 20,000 people crowded there. I photographed this tragedy for four hours,” Kilic recounts in a video presented in the last annual Visa pour l’ Image. “Almost every person had a child with them; they screamed and were trying to pass through the crossing. The opening was so small that people stepped on each other to go through it and the children were handed over the barbed wire. I hope I won’t see anything like that again in my life”.

Bülent Kiliç, a Turkish photographer born in 1979, began his career as a journalist for the local press. In 2003 he became a photojournalist and two years later he joined AFP as a stringer.

Since then he has realized many reportages, covering events in some of the hottest areas of the planet.

He is the recipient of numerous international awards. In 2014 he was named Best Wire Photographer of 2014 by TIME. In 2014 Kiliç won prizes at the Bayeux-Calvados War Correspondents awards, the North American Press Photographers Association competition and the China International Press Photo contest.

In 2015 he won first prize in the Spot News Single at the World Press Photo Awards 2015 for the image of a young woman wounded during clashes between demonstrators and security forces in March 2014. Kiliç also won third prize in the same category for the stunning image of a coalition airstrike against Islamic State group militants on the Syrian border town of Kobane in October 2014.

He has recently won the Visa d’Or for News, the most prestigious award handed out at the “Visa Pour L’Image” Festival in Perpignan, France for his reportage about syrian refugees fleeing across the Turkish border.