Jose Efrain Rios Montt, who ruled Guatemala for nearly seventeen months during 1982 and 1983, was on trial in Guatemala City for genocide and crimes against humanity. The charges arise from systematic massacres of the country’s indigenous population carried out by Guatemalan troops and paramilitary forces during this phase of the country’s long and brutal civil war, and the related mass forced displacement, especially in the Ixil region. 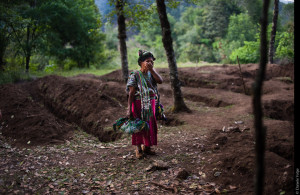 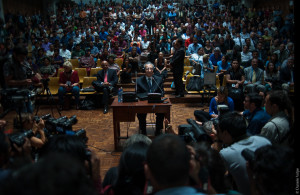 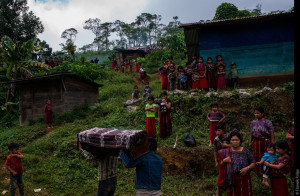 The main charges allege that Rios Montt was the intellectual author of 1,771 deaths and the forced displacement of 29,000 Ixil people.

After more than 30 years, a former Guatemalan dictator was found guilty of genocide and sentenced to 80 years in prison after a trial meant to settle the score for the massacres during the height of the country’s 36-year civil war.

This was the first time a former head of state has been prosecuted for genocide in a national, as opposed to an international, court.

Only ten days after a trial court issued its historic verdict, Guatemala’s Constitutional Court, overturned the verdict and set the trial back to restart.

However, the trial was an important milestone in holding political and military leaders accountable for international crimes.

Guatemalans hope it will also contribute to an accurate historical account of the gross human rights violations committed during the civil war, in a process that will reinforce country’s young democracy.

The “Truth Commission”, promoted by the United Nations, and established by the peace accords of 1996, estimated that more than 200,000 people have died and over 40,000 had disappeared during the conflict that lasted 36 years. Over 80% of the victims were part of the indigenous Maya population.

The commission found that state security personnel and paramilitaries were responsible for 93% of the violations.

Nowadays many are still searching for the remains of their deceased relatives during the years of civil war. Civilians who were killed or who died of starvation and lack of medical care when they were hiding in the jungle to flee from the army.

Exhumations make up an important chain ring of clarification, providing to Guatemalan justice gathering evidence of massacres against civilians.

Teams of forensic anthropologists are working on the exhumation of the “disappeared”, people buried in clandestine cemeteries or mass graves. The forensicinquiry tries to close the grief of the survivors, who can give a dignified burial to their loved ones.

Daniele Volpe is an italian photographer who has been working in Guatemala. His images are mainly aimed at issues related to human rights and the pursuit of social justice by focusing on Central America. He followed the events unfolding around extractive activity of a gold mine in the western highlands of Guatemala paying attention to community opposition to the mining project and in 2012 published “Under the same sky”, a photo book in three languages (Spanish-English-Italian) on the subject. He has been working on other issues, focusing on “human stories” that define society in the aftermath of Guatemala’s civil war.

He was recently awarded in POY international and POY latam and he is among the 24 finalists at The Manuel Rivera-Ortiz Grant, 2014. He is graduated in “Storytelling and New Media”,  a annual course promoted by Fundacion Pedro Meyer and World Press Photo, Mexico. He won a scholarship with which he participated in the Foundry Photojournalism Workshop 2014, and his ongoing project “Guatemala – Ixil Genocide” was exhibited at Lumix Festival for Young Photojournalism 2014 in Hannover, Germany. He has attended at several workshops with Rodrigo Abd, Ron Haviv, Luis Gonzales Palma, Cia de Foto, Alejandro Castellote. His works was published in The Wall Street Journal, The Guardian, El Periodico, Il Reportage, Makeshift, 6Mois among others.