Secrets from the magic box – Photographs for a pure water

In the context of developing countries, more than a billion people lack access to safe drinking water.

In rural areas of Western Africa, such as Mali, children grow up free as wild trees in barren areas of land. And just like those trees, children survive both the dry and the rainy seasons.

These photographs want to tell stories about “water”. That is, stories about children and their feeling and experiences regarding “water”.

The children of Niongonò, Bolimbà and Pah (Pays Dogon – République du Mali) have been drawing and portraying with each other by means of polaroid-type cameras, freely shooting around their village.

Further, each child has been portrayed next to a tree (or plant) holding either a bottle, water tank or any other proper recipient. Such photos have been shot in analogic with a 4×5 folding camera.

The final object is a picture, which aims at providing observers with the sensation of being in such kind of paradise, growing up like trees in desert without a constant access to water.

The project was made in collaboration with Alì 2000 Onlus, a non profit organization dedicated to develop access to drinkable water in rural areas of Western Africa and particularly in Mali. Since year 2000 Alì 2000 has built over 35 large-diameter waterwells most of which in the area of Bandiagara near the border with Burkina Faso. 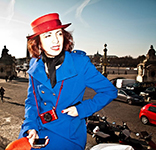 Elena Givone was born in Turin in 1979. She lives and works between Turin and Amsterdam.

She graduated with honors from the IED of Turin and at the Gerrit Rietveld Academy in Amsterdam.

In 2006 she is awarded with the “Attenzione Nuovo Talento Fotografico Fnac” prize, thanks to the project: “PAZI MINE- Sarajevo 2006”.

In 2007 she studies photography at the Gerrit Rietveld Academie in Amsterdam.

In 2008 she wins the “Moovin’ Up” prize, sponsored by GAI (Young Italian Artists).

Then she shows her works in a personal exhibition at Contemporary Art Museum of Florianopolis – Santa Catarina, in Brazil.

On this occasion she carries out a few personal projects, such as “Flying Away”, wich began on streets of Madrid in 2007.

In Brazil, she begins teaching customs and tecniques of photography with the workshop “Photography as Art” to a group of university students and youngster from an indigenous tribe.

In 2009, she went to Salvador de Bahia where she continued her project “Flying Away” with teenagers living in social educational facilities and juvenile in prisons for detention. In 2012 she visits Sri Lanka.

This new marriage between art and solidarity becomes a source of inspiration for the young artist, hereafter new solidarity projects follow in Mali, Burundi and India.

Alì 2000 Onlus is an independent and no-profit organization dedicated to develop the access to drinking water in West African countries such as Mali and Burkina Faso, both in the Sahel area which is particularly vulnerable, poor and stressed by long periods of serious dryness and draught.

In Mali, Alì 2000 has built over 40 traditional water-wells, mostly in the region of Bandiagara and further south in the abandoned plain named  Senò. Currently, due to military-political crisis in the country new projects in Mali have been suspended  until – hopefully – sufficient level of security will be re-established for a foreign organization to operate without risk of kidnapping.

In Burkina Faso Alì 2000 is completing a project comprising ten drilled  water-wells equipped with manual pumps to serve ten different schools located in isolated rural surroundings in the Centre Ouest region of the country. The purpose of the project is to provide clean water to the children, not only to drink and cook in the self-organized cantine but also to encourage good and basic  hygienic practices such as the habit of hand washing e keep clean the pit latrine,  essential to prevent gastro intestinal infections which are the first cause of child death in the West African countries. Other than during school hours the water-pump is for the benefit of the population of surrounding villages.

100% of funding comes from the support of private persons and entities and projects are based on direct and personal relationships with donors in Italy and with the population of the villages which benefit from the project.