The Krokodil is a home-made drug produced with highly toxic chemicals such as iodine, paint thinner, hydrochloric acid and red phosphorus scraped from the strike pads on matchboxes. The main ingredient is the desomorphine, an opiate that is obtained through the synthesis of codeine. 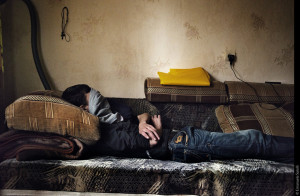 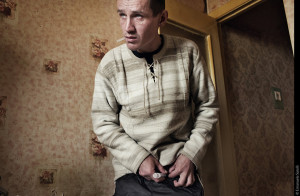 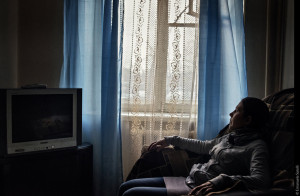 The process consists in ‘cooking’ codeine with the other chemicals till the substance is reduced to a condensed dark brown paste.

There’s something hypnotic about the rituality of the process. The smell of sulfur is extremely pungent, and it permeates everything around the small kitchens where Krokodil users hide from the external world.

Those who use it shut themselves up in the house and engage themselves in a continuous cycle of preparation and getting high, with an effect that lasts about 40 minutes each time.

They spend days indoor, in an alternation of moments of unconsciousness and sporadical lucidity.

Krokodil addicts rarely manage to maintain a regular social life. Most do not have a permanent job, at most they do odd jobs to buy the next dose of codeine.

Codeine is substantially a simple painkiller for headaches, available in any pharmacy.

In June 2012, a ban on over-the-counter codeine sales was introduced bringing numbers of users down sharply, but many are now getting this key ingredient on the black market.

The desomorphine that is “cooked” is highly impure and has devastating effects on muscle tissue, brain cells and organs. Wherever on the body a user injects the drug, the blood vessels burst and the surrounding tissue dies. Liver, kidneys and heart are the first organs to be affected. Those who use it have a life expectancy of about three years.

In Yekaterinburg, a Russian city on the edge of Siberia, Krokodil is widespread in the suburbs of the city as an alternative to heroin, considered too expensive. Yekaterinburg is the first Russian city in Asia and has about one and a half million inhabitants. About 80 percent of the population of the entire region lives in Ekaterinburg. Registered drug addicts are about 40 000.

Drugs consumption and addiction in Russia is generally under estimated, there’s no real policy for trying to contain the phenomena. According to specialized research groups and associations, the only real measure in force is to put addicts in prison for a couple of years, as if this could substitute medical and social rehab. As a matter of fact, once out of jail, their conditions are often worst than they were before.

Born in Italy in 1979, Emanuele Satolli started his career as a journalist after attending the School of Journalism in Turin, following he specialized in photojournalism focusing on social and political issue and human being behaviors. With his work ‘Krokodil tears’ he won the Kontinent Awards 2014 in Editorial/Documentary Projects Category. The work was also selected for the Hannover LUMIX Festival for young Photojournalism 2014 in both categories photo and multimedia. He’s currently based in Rome.