Caliber 3 is a training centre to learn how to shoot with weapons and fight with the Grav Maga discipline, to defend oneself from terrorists. The lessons are given by IDF (the Israeli army) ex officers. Sharon Galit, the founder of this center that is the most popular in Israel, trains police officers, private security guards and settlers that are building everywhere in the West Bank and have easy access to the permits to posses weapons. 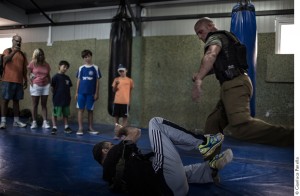 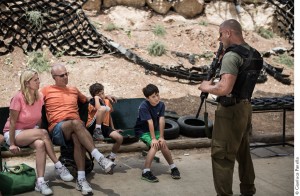 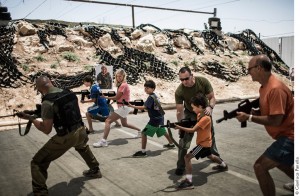 Sharon established Caliber 3 after losing is brother in an attack in Gaza.

In Israel security is fundamental.

At Caliber 3 it is possible to take private lessons. At the private lesson I attended the instructor, Eitan Cohen was giving a two hours training to an American family from Sacramento: mom, dad and their three children.

Eitan explains to the family that Caliber 3 is the house of counter terrorism for jews, supporters of the State of Israel, from all over the world.

Cohen goes on insisting on the importance of being able to protect oneself beacuse  “If we close our eyes again something like the holocaust can come back in a second”. It is important to keep ones eye open and always be ready to protect oneself. The purpose of the  program and of the trainings at Caliber, in the words of Cohen, it is not to kill or to start fights but to defend and protect one self and other jews.

What could be the social and psychological implications for children to take him with a rifle, even if fake, to shoot at targets with human features: photographic reproductions  of palestinian “terrorists”?

When practiced by the entire family together, outdoor activities, excursions and sports, function as a binding agent, reinforcing relations. This experiences shape one’s characher, and become important memories to go back to when children become adults.  This are ordinary social  practices in every culture.

I wonder which mark will a family experience directly associated with violence leave on the minds of  Maxwell, Ezekiel e Nathaniel?

Why a californian family on holiday in Israel will choose to go to Caliber 3 to learn how to shoot with automatic weapons designed for war? Lili Kenter, the mom, explains: “I wanted my kids to understand the importance for the State of Israel to have an army, I wanted them to understand how brave this soldiers are and what they really do, they carry weapons and they kill, but they really protect the State of Israel”. 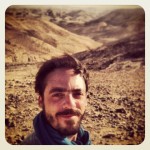 Gianluca Panella (b. Florence – 1976), photographer, journalist, he travelled to North Africa, Balkans, Haiti, Lebanon, and United States. He works on social reportage, current affairs and portraits. After studying Law he travels to Morocco, Egypt, Spain and U.S.A., where he lives for a year in New York.
The passion for photography and figurative art  grows while in university. Gianluca is a  self-taught photographer. After studying photojournalism with Leonardo Brogioni in Milano he starts to work for a local Tuscan daily newspapers and registers at the “National Order of Journalists”.

In the same years he meets Romano Cagnoni who teaches him that working as a photojournalist means bearing an enormous responsability.

In 2011 he stops the collaboration with Sestini’s agency to dedicate himself to personal projects, upon which the “Tanit Project”, a documentary work on the Mediterranean sea retracing the routes of ancient Phoenicians.