Greenpeace - To the last drop

The people of Komi, who reside in the northern part of Russia, belong to the Finno-Ugric ethnic group.
The family of Arteyevs belongs to Komi-Izhemtsy, the northernmost branch of Komi, who traditionally live by breeding reindeer. 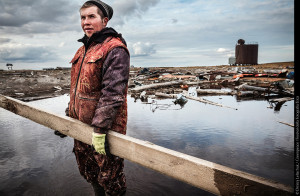 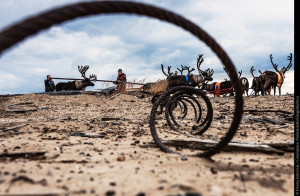 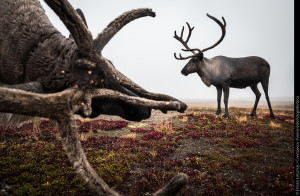 By developing oil industry, Russia invests a lot into its arctic projects.
This threatens the fragile arctic nature as well as Komi’s way and quality of life.

The oil pipelines themselves are not as dangerous as the abandoned wells and drilling of the new ones. The employees of oil industry are careless about nature and leave countless oil spills behind. This leads to soil and water pollution and results in a range of ethical, humanitarian and ecological problems.

Industrial waste is another problem. Metal ropes, boards with rusty nails, pieces of glass make reindeer injure their limbs.As reindeer graze on tundra, such an injury means death from a brown bear, a wolverine or infections. Reindeer are the only Komi’s material value and the people are growing poor by losing the animals.

Polluted drinking water, high risks in tundra for reindeer and herders, working in bad weather — all of this makes many Komi abandon their traditional way of life and find a new job for oil companies, the major employers in the region. To make reindeer herders stay in tundra, Russia abolished military conscription for them, but in spite of it, the population of Komi is steadily decreasing.

In his works Dmitrij focuses mainly on documentary and reportage photography. His photographs have been exhibited at international photo exhibitions in Switzerland, Germany, Belarus and Russia. In 2013 his book «The Sand People of Schoina» / «Les hommes de sable de Choina» has been published in French and German,  also, in collaboration with Dominique de Rivaz, the documentary «Elegy For a Lighthouse» / «Élégie pour un phare» has been released, where Dmitrij worked as a cameraman.

Greenpeace is an independent global campaigning organisation that acts to change attitudes and behaviour, to protect and conserve the environment and to promote peace.

Greenpeace is present in more than 55 countries across Europe, the Americas, Asia, Africa and the Pacific. To maintain its independence, Greenpeace does not accept donations from governments or corporations but relies on contributions from individual supporters and foundation grants.

Greenpeace has been campaigning against environmental degradation since 1971 when a small boat of volunteers and journalists sailed into Amchitka, an area north of Alaska where the US Government was conducting underground nuclear tests. This tradition of ‘bearing witness’ in a non-violent manner continues today, and our ships are an important part of all our campaign work.

We exist to expose environmental criminals, and to challenge government and corporations when they fail to live up to their mandate to safeguard our environment and our future.

Greenpeace Germany was founded in 1980. Its first campaigns worked to protect whales and seals, and bring public attention to the chemical pollution of the environment caused by the ocean dumping of dilute acid and toxic waste incineration in the North Sea. Spectacular actions made headlines and received a great deal of attention from the German media. This enabled Greenpeace to put pressure on environmental polluters, and the organization quickly achieved early success which gave a wide recognition. It gained more and more supporters and donors. Today, Greenpeace has about 580 000 donating supporters in Germany alone.