The author has been able to condense in five shots the dramatic sequence of events in the lives of child witches, that after decades still rages across the streets of Kinshasa and the Democratic Republic of Congo and has awaken the attention of international humanitarian observers. The images effectively reflect not only the sense of estrangement and absurdity linked to the exorcism practices, but also the powerlessness and the pain of the accused children who find themselves bearing the weight. This intense and disconcerting work is supported by a great formal coherence and forces us to focus on the social problems that have caused the spread of these beliefs among the civilians.

Between 20,000 and 50,000 children live in the streets of Kinshasa. Organized in gangs, they get by, sometimes thanks to theft or prostitution. More than two third of them were chased away from their home in the pretext that they were child-witches and responsible of all the troubles of the family (death, unemployment, disease, etc.). 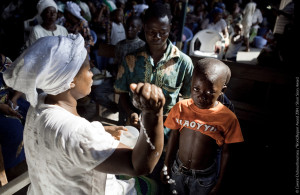 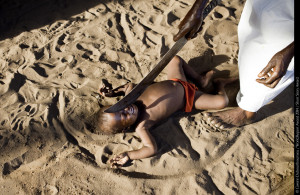 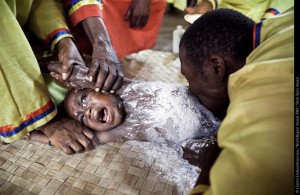 The immense majority of the people living in Kinshasa are persuaded by the truthfulness of this curse. More than one hundred new “child-witches” are so discovered every month and thrown out in the streets.

The faith in witchcraft is profoundly rooted in the Congolese culture, but the phenomenon, which consists in abandoning children by accusing them of witchcraft, took a notorious scale only since the end of 1990s.

In this immense overpopulated shanty town that is Kinshasa, where 95% of the population get by below the poverty line, the children are unproductive mouths to feed.

Link About the theme: www.reejer.org

I became interesting in photography while working in East-Africa and the Horn of Africa (Somaliland, Kenya, Ethiopia, North-Sudan and South-Sudan) for NGOs. I moved to the Democratic Republic of the Congo in 2007 and worked as a professional photographer based in Kinshasa from April 2010 to February 2012, regularly collaborating, among others, with the French Press Agency (AFP). I recently moved to Paris and I currently work as a freelancer.

Since 2010, my work has been regularly awarded. This year, I was awarded the Sophot price in France, and was finalist of both the Afthermath grant and the Bourse du Talent. Last year, I received the Photoreporter Festival of Saint Brieuc grant to continue a long term project about copper mining in the South-eastern province of Katanga, DRCongo, which also reach the final at the Photo Philanthropy Professional Award. In addition, my work “Turkana warriors” (prefiguring the long term project I intend to do with the Getty Images grant for editorial) has been short listed at the Sony World Photography Awards in the category “Fine Art – Portraiture”, and my series of portraits of women victims of sexual violence in Eastern Congo reached the final of the Bourse du Talent. The same year, my feature about “the child-witches of Kinshasa” has been awarded the jury’s special prize at the 8th Days Japan International Photojournalism Festival. In 2011, the same work was awarded the jury’s special mention at the Roger Pic Prize and the investigation prize at the European Journalism Festival. I also received the Getty Images Creative Grant. In 2010, I was already short listed among the exceptional finalists of the same grant, and was awarded the jury special prize at the International Scoop and Journalism festival of Angers for he work “Etat d’Armes”, about ammunitions and weapons stockpiles in the Congo.