The jury recognizes the author’s ability to realize a tableau of Afghan society in its multiple nuances, recounting everyday life of a country that was able to keep its culture alive together with a flicker of normality in the midst of a devastating conflict. Ten years of war are told with a profound vision and the capacity for empathy managing to present the complete Afghan reality in its contradictory nature, a nature that oscillates between a profound desperation to a likewise extreme beauty. The work surpasses the classic development of a reportage story and instead is an account of an entire civilization.

Although I have spent my entire professional life traveling from one conflict zone to another, in the past year, for this project, I have focused exclusively on the men and women whose lives have been crushed by the war in Afghanistan, a country I have been visiting for over a decade.

In my role working for the Getty Images , the people of Afghanistan have been my main subject matter in these past four years that I have been coming and going amongst them. They have become part of my memories, both good and bad, and their happiness and sadness have become my main concern. 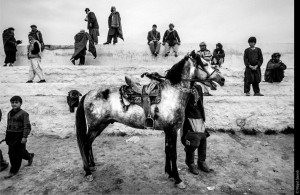 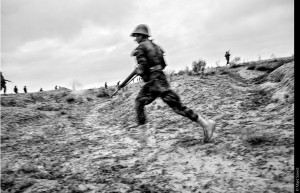 For the past century, Afghanistan has been involved in various wars and conflicts, due to its internal politics, religion, or because other powers sought to conquer these lands. Remnants of Russian tanks are still ever-present in the streets, mountainsides and valleys. After the war with the USSR, Communists seized power in the country. It was during this time that conservative Muslims started to get organized, and eventually gained power themselves. Later, they in turn became another cause of strife, this time in the civil war between Al Qaeda and the country’s regular civilians. After September 11th, the world noticed what was going on in Afghanistan and the dynamics of its civil war began change once more. This time Afghan people faced a new war, as foreign countries squared off against al-Qaeda.

I could never find out how much the portentous, traumatic passage of life has hurt these peoples’ lives, as they have always remained impassive in front of my camera. I am very much interested to know how the viewer feels when seeing my images. The main question I have had during these years is: that what is the result of all these wars? Every time I see a young Afghan boy or girl in the streets, as unhappy as children in European countries are happy, this question rings in my head.

War is not the only thing going on in Afghanistan. There is the influence of Persian and Mughal culture in traditional Afghan architecture and decorative garments. There is a paradox between the tranquility of Eastern culture and the violence of war.

I wonder what the characters I have photographed might think about the people viewing the images, and the world that they come from. Just imagine you were born in Afghanistan. How would you look at the world, or those countries, the only expression of which you have seen being through their armed forces and weaponry?

Sometimes it strikes me that we have a mysterious and deep connection. Even though we don’t see each other, we speak empathetically , talk about the cries of a generation, the tears of hopeless children, the violence and silence of a nation. Throughout all the lonely and difficult days of war, I kept telling myself that I’m a photojournalist, in the streets of Afghanistan, with the responsibility of exploring certain realities.

I went to Afghanistan, remaining there for several years, and reaping a harvest of bittersweet memories. Sharing a common tongue, I found that I could live alongside the Afghans, understanding, laughing and crying with them.

Majid Saeedi is an Iranian documentary photographer. He has photographed Middle East with a focus on the humanitarian aspect for the past two decades. Majid also takes a special interest in telling the untold stories of social issues and social injustice through his photos. Majid was born and raised in Tehran.

He started photography at the age of sixteen and when he turned eighteen, he went to Iran Iraq border to take photos of the refugees.  Majid is currently collaborating with Getty Images, covering Afghanistan and Iran photo reportages. He has managed photography department of various news agencies in Iran and led numerous key projects for over 15 years.

One of Majid’s interests is to do street photography and portray citizens’ ordinary lives. When Majid is not working, he likes to teach photography to students and mentor young photographers.

Majid has won numerous prominent and prestigious photography awards from around the world. He has received the title of “The Best Photographer of Iran” eight times. His photos has beenpublished in international presses such as Times, Spiegel, Life, New York Times, Washington Post, Washington Times, Time Magazine and various Middle Eastern publications and online agencies.

Majid has traveled to many countries in the Middle East and photographed the injustice as well as the atrocities. His recent photo story displayed the images of the Afghan people whose lives have been affected by several decades of war in Afghanistan.