THE RIGHT DISTANCE – From meeting to dialogue: an history of cooperation

On the occasion of the 50th anniversary of its foundation, MLFM proposes a photographic exhibition to describe the commitment of its volunteers.

The identity of the NGO is the result of these years spent helping the poorest people; in the meanwhile many aspects of international cooperation have changed, but the spirit of MLFM’s founders is still alive and it influences its choices.

In the early 60s the NGO worked in Developing Countries through humanitarian aids, while presently it’s working with well-structured development projects aimed to the independence of the local communities.

These images, through the eyes of the volunteer, will take the viewer toward the encounter with other communities and countries, telling about contrasts, surprise, stereotypes, expectations, hopes and desires. 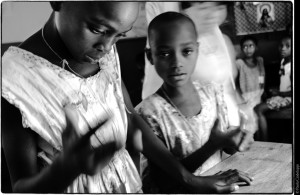 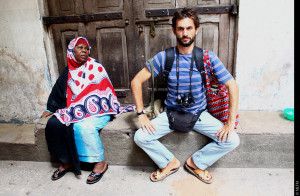 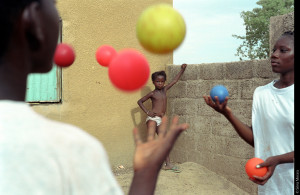 The exhibition starts with the portrait of Andrea, a MLFM volunteer who, with irony and self-criticism, deliveries to the spectators the key to go in with the Encounter, in other words the first step for the implementation of a cooperation project.

The color of the photographs that follow, reflects the sensory perception: the volunteer let himself get carried away by the enthusiasm and curiosity of something new. He gets the invisible, captures it in a picture and the boundaries that separate the two cultures seem to dissolve.

Through her six snapshots, the photographer Silvia Morara describes this first empathic phase of the Encounter: the knowledge of a country and its people. As though in the photography, also in the development cooperation often happens that someone chooses to go beyond the close-up, focusing on an hidden issue.

The portrait of Sara, another volunteer, talking to Marie, can be considered a symbol of how this process of deep knowledge of the other people allows to better define our confines, our cultural identity, with respect to both parties.

It’s time to listen, to respect: “[it’s time to introduce] the right distance that permits them to keep warm and at the same time not to hurt to one another” (Quote Shopenhouer, The porcupine).

Once the proper empathy is achieved, then starts the Dialogue, which is the real precondition of a cooperation project and allows to create a long-lasting feeling of confidence.

With six photographs by Paola Codeluppi, extracted from its exhibition Ek Abana “Shots of everyday life,” MLFM wants to show a project that well represent its activity, where the color fades into the background because the real focus is on the relations established.

The Ek Abana Center has been founded in 2001 in Rep. Dem. Congo thanks to the volunteer Natalina Isella. The structure supports children accused of witchcraft: nowadays there are more than two hundred children who have achieved serenity. In addition to accept and guide them in their growth, MLFM works with their families and communities in order to demystify the belief of witchcraft and then gradually reintegrate them in the family circle. This project embodies the spirit of the NGO, continuity and dedication, but especially reveals the true aim of MLFM’s cooperation: not making mere charity or assistance, but finding the “right distance” to accompany and support these communities in a process aimed to the future sustainability , to autonomy and independence. 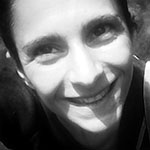 Silvia Morara was born  in Bologna, Italy in 1971. After a degree in Philosophy and an experience as an aid worker in Albania, she dedicated herself entirely to photography. She has collaborated with Italian photo agencies covering national and international reporting from Kosovo and areas of former Yugoslavia (Croatia, Bosnia, Serbia, Macedonia) for later moving to Middle East, Pakistan and Afghanistan. Starting from 2002 she has focused on the African continent: South Africa, Ghana, Burklina Faso, Niger, Uganda, Sudan, Angola and Nigeria, pushed by her curiosity and a new motivation to tell stories in a more relaxed way compared to the frenetic rhythm imposed by daily news. In recent years, she has started to photograph the realities surrounding her, trying to analyze what’s most difficult to describe: her own backyard and the world in which she grew up. She has realised exhibitions and books: “Milan XXI century” on the city of Milan and on the italian folklore of dance halls (let’s dance!). She has produced the book “Bonassola, the quiet season”. She has worked on the italian province (Per nascita o per scelta. Genti d’Oltrepo). She has organised collective exhibits in Barcelona called Domestic and realised a book for children called “Un Bacio”. In 2012 she published her second book for kids “Fotografi pronti allo scatto” (Photographers ready to shoot). From 2011 she has been teaching photo and reportage classes at Spazio Labò in Bologna. In 2013 the exposition “Angola: nothing happens, everything happens” was set up at Ragusa photo festival with the artistic direction of Giovanni Chiaramonte. In 2014 her first documentary movie “Io sono Diogene, e questa è la mia terra (I am Diogene, and this is my land)” will be released www.iosonodiogene.info. She is currently working as a freelancer photographer for the Corbis agency. She is also working on video/audio storytelling. www.moraratosatto.vimeo.com Personal website: www.silviamorara.photoshelter.com 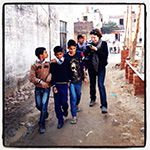 Paola Codeluppi was born in Milan in 1970, where she lives and works. She has an education in graphic advertising, photography and photo editing. She started working in photography as a set photographer for theatre companies and on cinematographic sets, as well as in still photography, advertising, industrial reportage. In the course of time she enhanced photo reportage cooperating with different NGOs, travelling mostly in Africa as well as in India and Lebanon. From 2003 she has been working also as a colorist in the cinematographic post-production, as well as a photographer, carrying out personal projects. ” I arrived to photo reportage as part of a natural path, I like to tell a story by images and I like the opportunity that photography gives me to look for new ways in story telling”. Sito personale: https://www.flickr.com/photos/paola_codeluppi/

Fifty years, three continents, many works, thousands of people involved: the Movement for the Fight Against Hunger in the World was founded in Lodi in 1964 with the aim to fight malnutrition and underdevelopment. It first became an Association and then, in 1983, gained the authorization of the Italian Ministry of Foreign Affairs to operate as a Non-Governmental Organization (NGO).

Struggling against hunger and poverty has always been the NGO’s main mission, whose approach has been based on development projects rather than emergency aid.

Water and sanitation is traditionally the pivotal area of interest for MLFM, although in order to satisfy local communities’ requests the NGO also specialized in child protection, education, livelihood support, digital divide and health issues.

The support and the work of the local communities is an essential element in the implementation of MLFM’s projects, as its goal is to provide resources and expertise, without acting autonomously and independently from the demand and needs of the population, whose explicit call must be the first step of every project.

In Italy the purpose is to spread a new cultural behavior in order to promote a global approach to underdevelopment and environmental challenges, as to favor a new perspective on global citizenship, with a particular focus on youngsters.

Recently the NGO activities address immigrants and “new poors”, with initiatives in favor of integration, supporting public authorities’ efforts and associations already committed in this field.