Nancy Borowick - A Life in Death

One can only truly understand and appreciate life when faced with one’s own mortality.
Nobody wants to talk about death, but it is one of the only things that is certain in life, so an awareness of this finitude allowed my family to take advantage of the time they had left together.
“A Life in Death” is the story of family, looking at the experiences of two parents who were in parallel treatment for stage-four cancer, side by side. The project looks at love and life in the face of death. It honors my parents’ memory by focusing on their strength and love, both individually and together, and shares the story of their final chapters, which came to a close just 364 days apart from one another. 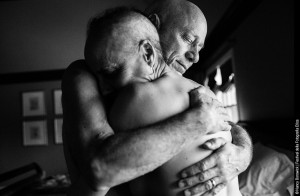 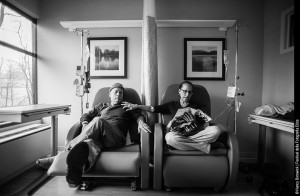 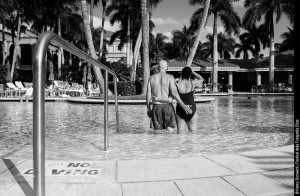 “Life is a gift, and no one promised me longevity.” These are the words, spoken by Howie Borowick just a few months after he was diagnosed with inoperable stage-4 pancreatic cancer. Having lost both of his parents before his sixteenth birthday, he understood the fragility of life. He never wasted a day, thinking each would be his last and when his cancer arrived, his bucket list was empty. The only thing he was not ready to leave behind was his wife Laurel, the love of his life, who had been managing her disease—breast cancer—for over 17 years.

Our story looks at the simultaneity of life—the good, the bad, the important, and the frivolous. Laurel and Howie chose to spend their last months creating new memories rather than cowering in the reality of their situation. They were married 34 years, and suddenly their time was up. Howie passed away on December 7, 2013, one year and one day after doctors discovered his cancer. After this, life changed for Laurel. Having been half of pair for over half of her life, she was now a single. It was in this time that her disease began to worsen, and her quality of life diminished. She wasn’t scared of death—she’d been preparing for it since her first diagnosis at age 42. She was scared of the process of dying, and losing her ability to think, love, and communicate with her children.

With a 30-foot length of oxygen tubing trailing behind her, Laurel spent her final weeks surrounded by those who loved her, and whom she loved. The pain worsened and the breathing became more labored, and soon she no longer had the strength to get out of bed. Having chemotherapy meant having hope, and chemotherapy was no longer in the cards. Laurel took her last breath on December 6, 2014, just a day shy of the one-year anniversary of her husband’s passing.

I photographed my parents to hold on to their memory, and to capture their essence and strength in such a trivial time. Everyone wants to find purpose in his or her life. My parents’ final purpose was found in this moment, in this gift that they gave to me: allowing me to tell their story—a love story—and the story of our family and the legacy they have left behind. When time stops, what was all of this for? They did it for us.

Nancy Borowick (b. 1985) is a humanitarian photographer currently based in New York City. She is a graduate of the Documentary Photography and Photojournalism program at the International Center of Photography and holds a degree in Anthropology from Union College. Over the last 10 years Nancy narrowed the focus of her work, telling stories of illness and personal relationships, using compassion, humility, and trust as tools to connect with and explore the lives of her subjects. Nancy’s most recent focus has been her parents’ battles with cancer.

She is a regular contributor to the New York Times, Newsday, and Corbis and has also been featured in the International Herald Tribune, the New York Times Lens Blog, CNN, National Geographic PROOF, Time Magazine, Photo District News, the Washington Post, Stern Magazine, and Newsweek Japan.

She was recently awarded 2nd place in the World Press Photo competition in the Long Term Projects category. She also won the Arnold Newman Prize for New Directions in Photographic Portraiture and the Eddie Adams Workshop Award in Innovation in Visual Storytelling. In 2015 Borowick earned an Honorable Mention in the NPPA Best of Photojournalism competition in the Contemporary Issues Story category. In 2014, Borowick was named one the Best of ASMP featured photographers as well as one of Lens Culture’s Top 50 Emerging Talents. Her Cancer Family, Ongoing project was presented at the Visa Pour l’Image in Perpignan, France in 2014 and the following year, 2015, was exhibited at the festival. Her work has also been exhibited at the Look 3 Photography Festival in the USA, the Obscura Photo Festival in Malaysia, the Angkor Photography Festival in Cambodia, the Guatephoto Festival in Guatemala, the Oberstdorfer Fotogipfel Photofestival in Germany, and the International Photo Festival Leiden in Holland. In 2016, Nancy presented at the Norrlandsdagarna Photo Festival in Sweden and the work will also be exhibited at the Lumix Festival for Young Photojournalism in Germany.