Deepening into a rarified and surreal atmosphere, the author tells about the rise of nationalistic impulses in a country that is a member of the EU: Hungary. The reportage, characterized by suspended aesthetics and attentive use of colors, finds a new language to describe the pervading sense of a movement of this kind, a movement that attempts to instill itself in different layers of the population until the new generations are engaged.

July, 2013. Mogyoród (Hungary) “Young patriots documents the daily life in a military summer camp for children and teenagers focusing on the fragility of the attendees, in transition between from the childhood to the adulthood”. 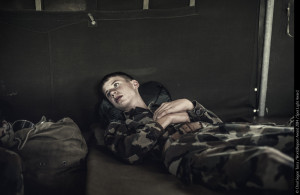 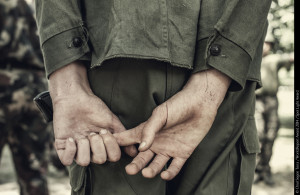 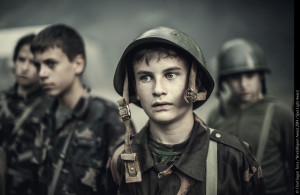 The military summer camp in Mogyoród, Hungary, is a private project which each year sees the arrival of hundreds of children and teenagers between 10 and 15 years old.

Some came attracted by the fascination of the military way of life, a militarism which is omnipresent in Hungarian society thanks to its imperial past and the memories of both the Nazi and the Communist periods. Others are brought here by their parents (mostly Hungarian nationalists) so as to introduce them to the unforgiving adult world where emotions are rarely permitted and life must be faced with rectitude and discipline.

For a week they will live in tents, will receive military training from experienced soldiers who are still active, will acquire notions regarding Order and the Homeland, will endure long nights on guard duty without sleep, will learn how to use old out of service AK-47s built in Czechoslovakia (with blanks) and will even simulate being under teargas attacks.

It will be a week of screamed orders during which intense physical exercise, educational behaviorism and precooked food will prevail; a place where any vulnerabilities and all questioning of military methods are simply overlooked, silenced and inwardly repressed.

The young soldiers who had previously already felt the call of the Homeland will live the week’s activities impregnates wit epic airs. On the other hand, the skeptical protagonists, increasingly desensitized, more obedient, more docile, will have been transformed into disciplined young patriots of the great Hungary which one day will go back to being what it once was. 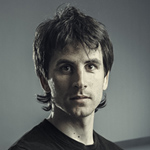 Since 2011 he is a freelance photographer. His photography focuses in human frailty and vulnerability.

His photographic project Young Patriots has been has received the EXPOSURE AWARD 2014 of See Me (New York, United States), has been one of the photographic projects selected as Descubrimientos PhotoEspaña 2014 (Madrid, Spain), was exhitibted at the Emerging Photography PA-TA-TA Granada Festival (Granada, Spain), at DOCfield 2014 Festival (Barcelona, Spain), and will be exhibited at La Kursala de la UCA gallery (Cádiz, Spain) , Encontros da Imagem (Braga, Portugal), and Backlight Festival (Findland). Young Patriots was also published in CNN and Cicero Magazine (Germany).

Currently he works on commercial assignments and he is also a contributor of the Echo Photo Agency.