In 2012, when I was living in Haiti, Gabriele came to visit. He had just received his tax bill and realized that the Italian state was about to take almost 50% of his income. We were looking at a map of the Caribbean and, on seeing that the Cayman Islands were just one hour away, he jokingly said, “Well, I should just go and hide my money there!”

It dawned on us that we knew next to nothing about what tax havens are and how they work. We started doing some research and, a couple of months later, we caught a flight to George Town on Grand Cayman. 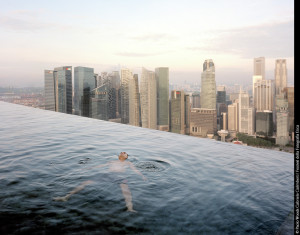 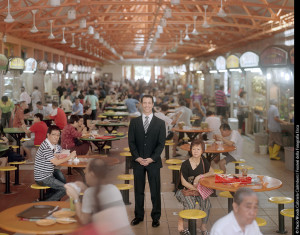 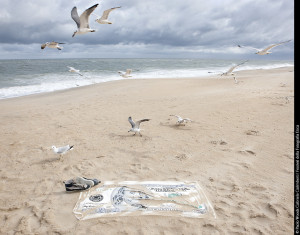 There is a lot of literature on tax havens, but there are very few images. The articles and reports on this poorly understood subject are usually all illustrated with the same photos of palm-fringed tropical beaches. This makes sense, since so much of what goes on in tax havens is virtual. It cannot be seen and, often, it is not even happening there at all. It is happening “elsewhere”, which effectively becomes “nowhere”. We spent over two years travelling to the offshore centres that embody tax avoidance, secrecy, offshore banking and extreme wealth, driven by our relentless obsession with trying to translate this rather immaterial subject into images. Our hope is that we have produced a body of work that shows what these places look like and, even more importantly, what they mean.

It has been estimated that as much as $32 trillion are sheltered in tax havens worldwide, largely out of sight. That is 13 times the GDP of the United Kingdom. Much of this money is stashed offshore by very wealthy individuals. But a growing share is owned by companies that use tax havens, often legally, to escape financial regulations or to reduce their taxes, draining the resources countries can spend on education, health care and security. Tax havens are not an exotic tropical eccentricity, but have become a structural instrument of the globalized economy. They confront us with fundamental moral issues, involving the relationships between public and private; between companies and states; and between the haves and the have-nots.

We have conceived “The Heavens” as the slick annual report of a successful company, borrowing the photographic tropes and language of the world we have investigated. “The Heavens”, actually exists, we have created it in Delaware, where for a small fee – with no documents required or questions asked – an LLC can be formed in less then 20 minutes. “The Heavens” is now based in the same Delaware office as Apple, Bank of America, Coca-Cola, General Electric, Google, Wal-Mart and 285,000 other businesses. 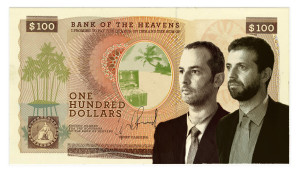 Paolo Woods was born of Canadian and Dutch parentage. He grew up in Italy, has lived in Paris and in Haiti. He is devoted to long-term projects that blend photography with investigative journalism. He has published five books, including “Chinafrica,” which deals with the spectacular rise of the Chinese in Africa. It has been translated into eleven languages and acclaimed as an exemplary melding of fine art and documentary photography. His work is regularly featured in major international publications. He has had solo exhibitions in more then a dozen countries and his pictures are in private and public collections. He has received a number of prizes, including two World Press Photo Awards.

Gabriele Galimberti was born in Italy and studied photography at Fondazione Studio Marangoni. He ran a professional photography studio and a gallery in Florence before becoming a full-time photographer doing both commercial work and personal documentary projects. He recently completed a 24-month trip around the world, during which he produced a number of extremely well-received bodies of work that have been featured in over 100 international publications. Three of his projects have become books published by Random House and Abrams in the US.