I followed the Fukushima nuclear accident from the beginning till now, covering almost two years of the story. And here there is my story.

On march 11, 2011 one of the worst earthquake and Tsunami hit Japan and Fukushima Daiichi nuclear power plant, damaging its safety and cooling systems. In a few days the core of the nuclear power plants number 1, 2, 3 started melting down with the release on air and on the ocean of massive amount of radioactive radionuclides. The Japanese government created an evacuated area of 20 km radius around the nuclear power plant of Fukushima Daiichi. From 20th April the Japanese government refused the admittance to the “No-Go Zone” to everyone, especially to journalists and photographers. But… From the first days of July till now I went inside the No-Go Zone several times to document the situation. 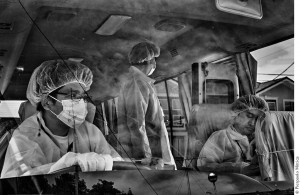 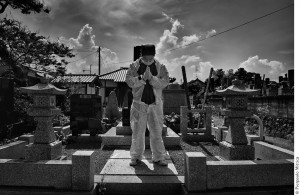 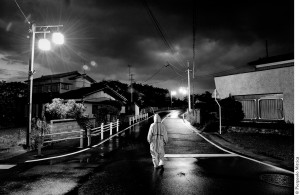 Inside the exclusion zone the contamination has a “leopard skin” distribution, as well as outside, where there are places heavily contaminated up to 60 kilometers from the plant, including parts of the cities of Fukushima and Koriyama. And in this area 2 million people live at risk of future disease caused by continuous exposure to low doses of radiation through inhalation and ingestion of radioactive particles.

Empties cities are waiting for us, only some abandoned dogs are wandering, on desperate conditions, on the streets. At the time of the evacuation all the animals were abandoned. You could encounter some of cows enjoying total if ephemeral freedom after wandering away from farms. But most disgusting of all are the decomposing carcasses of hundreds of cows left unattended on farms. During the night several animal activists enter illegally inside the Exclusion Zone to rescue pets and other animals. Most of the houses are locked, convenience stores full of goods, but some have been robbed, hospitals raided for drugs and ATMs smashed and emptied. Stalkers started to rob inside the No-Go Zone, spreading radioactivity all around Japan. Many people, most of them elderly, are still hiding out inside the zone, some of them with no visible protection whatsoever. The most common refrain I heard was: “Why should we bother leaving? We are old, there is no way that such radiation exposure could do us any harm. If I have to die, let me die on my own futon.” One time per month residents could go back to their houses to rescue their personal things. They wander in their houses, shocked among their memories, memories lost forever.

Despite the massive contamination, life is still going on in the “No-Go Zone” and in that sort of “nuclear limbo” that stretches for 40 kilometers outside the exclusion zone, where people do not know whether to stay and learn to live with radiation, or go away forever: “Here in Minamisoma almost all the women and children, went away. The population is now more than halved. We do not know yet what to do, whether to stay where we always lived on or go away. Unlike the first months after the accident now there is a lot of work, due to the work of decontamination that the government started in April 2012. All the hotels are full. But we do not see a future anymore, mothers do not want to bring their children to grow up in a place where there are radiations. What future can have a country without children? For now, let’s move on, we live with radiation. We have grown accustomed, we do not think most of their presence. We have a feeling of resignation, this frightens us surely, the resignation takes you to accept, not to fight, but this eventually allows us to move forward, otherwise we become fools. “

The story is still ongoing and we will not know soon the real consequences of the second worst nuclear disaster ever happened.

Dr. Pierpaolo Mittica, Italian humanist photographer, is an internationally recognized photographer and he is recipient of numerous awards. Currently he is represented by Trolley, Great Britain. He received the Masters Program at CRAF diploma in conservation, technique and history of photography in 1990, studying with Charles – Henri Favrod, Naomi Rosenblum and Walter Rosenblum, who is his spiritual father in photography. He photographed in Italy, China, Vietnam, Cuba, Bosnia, Kosovo. Serbia, Ukraine, Belarus, India, Indonesia, Bangladesh, Japan.

His photographs have been exhibited in Europe and the United States. In 2006 the work “Chernobyl the hidden legacy” was selected by the Chernobyl National Museum of Kiev (Ukraine) for the official exhibition for the twentieth anniversary of the Chernobyl disaster. He is a speaker at numerous conferences in Italy, Europe, the U.S. and Japan, and his photos have been published in Italian and foreign newspapers and magazines, including L’Espresso, Alias of the Manifesto, Vogue Italy, Repubblica, Panorama, Il Sole 24 ore, PhotoMagazine, Daylight Magazine, Days Japan International, Asahi Shinbum, The Telegraph, The Guardian. In 2012 participates with his photos of Fukushima to the realization of the documentary film “Fukushame” by Alessandro Tesei (http://www.teatroprimostudio.it/project/fukushame).