Sandro Maddalena - The Road Of Revolution

The clashes in Maidan square, blown in the Capital of the most important and strategic among the former Soviet Republics, started off the Ukrainian Revolution in February. It began as a peaceful protest against the pro-Russian Government of the president Viktor Yanukovich in November 2013, but after his refusal to sign deals of association to the European Union, the protest evolved in the following months in a true insurrection, when the streets of Kiev became the epicenter of a civil war. 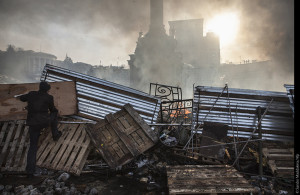 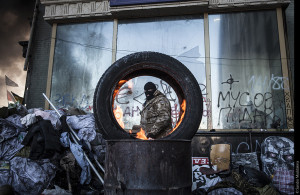 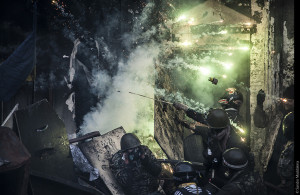 The peak of the clashes, paid with the highest price by the civilians standing under fire to protect the perimeter conquered of the square, also in the bloodiest hours, has been reached in the days of 18 and 19 February: dozen of people lost their lives in a few hours under the sniper fire coming from the Ukraina hotel roof. The resistance, made nearly exclusively by Ukrainians coming from the Western regions of the country, has been considered as a turning point in History after the end of the Cold War, and triggered a process able to draw again the geopolitical balances in Ukraine as in the rest of Europe. I tried to tell about this event being with the people actively fighting in this revolution: civilians that abandoned their jobs, students temporarily far from university, ultras organized in extreme right wing associations, priests that decided to celebrate the Mass in the streets and not in the churches, giving their blessing at the people on barricades.

Just a few days after the end of the revolution -closed by funerals celebrated in the square, conquering the Rada, the Ukrainian government, the nationalization of the house of the removed president Yanukovich- the Russian troops started the occupation of the Crimean peninsula; suddenly, it was clear that the victory of the Maidan movement was not the final step of the cease of hostilities, but just the beginning of an unstable period.

A second and even more bloody conflict started in April 2014 and it is still ongoing in the East of the country: its end is not predictable. That is the reason of my choice in the final shots of my reportage, where I preferred to highlight the mourning for the victims more than the celebration of a victory, to underline again how the normalization process of the country is still far from being completed. 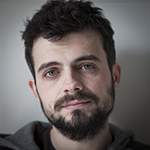 Sandro Maddalena was born in the province of Naples, Italy, on February 12th 1984. In 2010 he graduated in Photojournalism at the Academy of fine Arts of Naples. In 2009 he executed his first reportage about the collection of garbage in Cairo, thanks to which, he was finalist in the italian contest “National Prize of Arts” (2010) and  international contest “Click about it” (2012). In 2013 he is the youngest photographer of the group that presents a exhibit in Cologne about the last fifty years of social photography in Naples, with a work on a mental institution. In 2014 he was finalist in the international contest “Freelens Award for Young Photojournalism” and he was one of the winners in the international contest “Pink Lady Food Photographer of the Year”. His photographs have been published in italian and international magazines and newspaper. Actually he is working on a long-term project on the Ukrainian crisis.