The Yanomami are the largest relatively isolated tribe in South America. They live in the rainforest and mountains of northern Brazil and southern Venezuela.

During the 1970s and the 1980s, the Yanomami suffered immensely when Brazilian gold-miners invaded their land after the discovery of important mineral deposits in the territory. A highway was built and, suddenly, miners, woodcutters, workers, corporations and military arrived. They destroyed many villages, and exposed them to diseases to which they had no immunity. Twenty percent of the Yanomami died in just seven years and anthropologists predicted their extinction by the year 2000.

After a long international campaign led by Davi Kopenawa Yanomami, Survival and the CCPY (Pro Yanomami Commission), of which Andujar is a founding member, Yanomami land in Brazil was finally demarcated and officially recognized in 1991 as the ‘Yanomami Park’. Since then, many Yanomami communities have begun to live and prosper, and today they are one of the largest tribes in South America still living self-sufficiently and in relative isolation. However, the invasion of Yanomami land continues. Indians in Brazil still do not have proper ownership rights over their land – the government refuses to recognise tribal land ownership, despite having signed an international agreement that guarantees it. The Congress proposed a constitutional amendment, known as ‘PEC215’, which would cause further delays and obstacles to the recognition and protection of the tribes’ ancestral land.

Claudia Andujar has documented the daily lives of Yanomani people and their fight for survival since 1958. She shares the same goal with Survival International: help the Yanomami people defend their lives, protect their lands and determine their own futures. The success of the campaign proves that if tribal peoples are allowed to live on their own land they will be invariably healthier, with a far better quality of life than the millions of impoverished citizens marginalized by growing inequality. Also, evidence proves that tribal peoples are better at looking after their environment than any one else and that the lands they inhabit are the richest in biodiversity. They are the best conservationists and guardians of the natural world and the Yanomami Park, the largest area of protected rainforest in the world, it is a clear and captivating example. 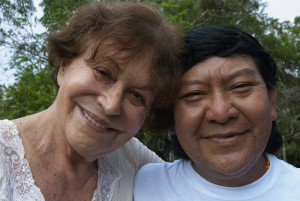 In the portrait Claudia Andujar with Davi Kopenawa, yanomami voice and shaman, in 2010.

Born in Switzerland in 1931, Claudia Andujar has been living in São Paulo since 1956, where she naturalized Brazilian. After spending her childhood in Hungary, she emigrated to the United States, where she studied at Hunter College in New York City.

From 1958 to 1971 she covered the region of the Amazon as a free-lance photojournalist for important magazines from Brazil (Realidade, Claudia, Setenta, Good Year Brasil) and from other countries (Life, Look, IBM, Fortune, Horizon USA). In the beginning of the 1970s she met the Yanomami and decided to entirely devote herself to this people. Founder of the Brazilian NGO Comissao Pro-Yanomami (CCPY), Claudia Andujar realised the most important photographic work ever dedicated to the Yanomami: portraits, life scenes, and shamanic sessions. Both through her effort and through her work, she played a fundamental role in the recognition, by the Brazilian government, of the yanomami territory.
Claudia Andujar is today an internationally renowned photographer.

Survival International is the global movement for tribal peoples’ rights. We are the only organization that champions tribal peoples around the world. We help them defend their lives, protect their lands and determine their own futures.

Tribal peoples have developed ways of life that are largely self-sufficient and extraordinarily diverse. Many of the world’s staple crops and drugs used in Western medicine originate with them, and have saved millions of lives. Even so, tribal peoples are portrayed as backward and primitive simply because their communal ways are different. Industrialized societies subject them to genocidal violence, slavery and racism so they can steal their lands, resources and labour in the name of “progress” and “civilization”.

Our work is preventing the annihilation of tribal peoples. We work in partnership with them. We give them a platform to speak to the world. We investigate atrocities and present evidence to the United Nations and other international forums. We support legal representation. We fund medical and self-help projects. We educate, research, campaign, lobby and protest. We won’t give up until we all have a world where tribal peoples are respected as contemporary societies and their human rights protected.