I arrived in the Ukrainian city of Luhansk in the early summer of 2014, and it was still a peaceful town, although the feeling of an impending disaster was already in the air. Every following day it became even stronger.

The conflict between separatists and the official Ukrainian authorities gradually escalated into the war. The south-east of Ukraine was embroiled in full-scale hostilities. That summer became the bloodiest time for the strategically important city of Luhansk. 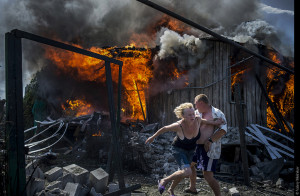 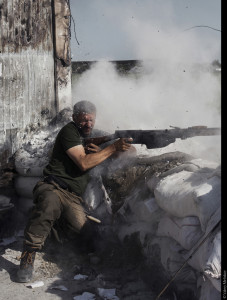 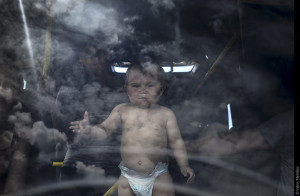 Locals had to survive without water or electricity under the daily shelling. And each new day could become their last day. There are often two armed fighting sides in any war. For me, as a photojournalist, the most interesting side in this conflict was the third one – ordinary civilians. Disaster came into their lives unexpectedly.

These people appeared the participants of the military confrontation against their will. They experienced the most terrible things: the death of their friends and relatives, destroyed houses and ruined lives of thousands of people.

According to the Federal Migration Service, more than 900,000 Ukrainian citizens hve been displaced. The fate of others is to live every single day like it is their last. Despite several ceasefires and suggestions for resolving the conflict, no side is ready to lay down arms.

I stayed in the Luhansk region for approximately two months documenting the dramatic and recent historical events in Ukraine. This series of photographs reflects the most awful events I witnessed in the summer of 2014.
Luhansk region, Donbass, Ukraine
June-July-November 2014

Valery Melnikov is a graduate of Stavropol State University on the path to become an award winning photographer and reporter, who over a decade has successfully worked for international news agency “RIA Novosti” and “Kommersant” newspaper.

Valery has also worked as a freelancer for AFP news agency in 2009-2010. When not on work assignments, Valery runs multiple independent projects and organizes exhibitions of his images that he brings back from those trips. His professional biography includes coverage of the Ukranian conflict from 2014 to present; the uprising of Mali Republic in 2013, the Syrian Civil war in 2012; the Lebanese war in 2006; the infamous conflict between Georgia and South Ossetia in 2008 and hostage taking raids by terrorists in Stavropol region in 2001 and Beslan in 2004.

Valery has dedicated his life to photojournalism and he commits with passion in any project that he works on. With a great sense of urgency, Valery brings people together through in-depth documentation from dangerous parts of the world for people to witness and become a part of those events.