Pig Iron is an exhibition on the serious social and environmental injustices committed by multinational Vale in the Brazilian states of Pará and Maranhão, among the poorest states in the country. 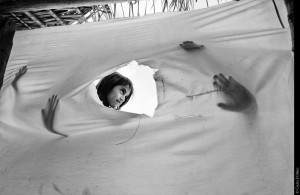 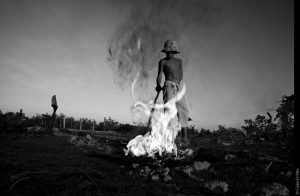 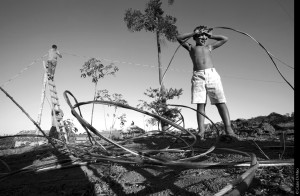 Founded as a small mining company in 1911, nowadays “Vale” is a global giant with a 59 billion dollars turnover. It has mines in Australia, Mozambique, Canada and Indonesia and metallurgical industries in North America and Europe, but the cornerstone of its activity remains, however, the extraction of iron in Brazil, which is the world’s second largest producer of this mineral. In order to carry iron from the mines of Pará to the port of São Luis in the State of Maranhão, Vale has built a nearly 1000 km long railroad, along which are carried annually more than 100 million tons of iron to be exported, an average of 300 thousand tons per day. This activity has about 10 million dollars earning every day that has any impact in the lives of poor people living in this area: no hospitals, no schools, no improving of the quality of their lives. They are just impacted because of the social and environmental damages.

The pictures of the exhibition speak about the stories, the daily life of these people, with the intent to show also their own point of view, not just the one of an economy of exploitation. The author did not want to show drama or pain, but hope, strength and the sense of community. Three riches that cannot be estimated with numbers and that Brazilian people has not lost after all.

Those pictures are part of a larger project, born from a collaboration with Arci, the ngo ARCS and the Brazilian campaign Justiça nos Trilhos, a network of associations and movements fighting against the abuses of the multinational Vale. With the pictures taken during the project was realized a book, which earnings were donated to the theater company Juventude pela Paz, a group of young people from Açailândia who are part of Justiça nos Trilhos. Theater, like photography, can be a means to inform and make aware the people about the social conflicts, they can be a tool for personal, social and political change.

Since many years, the photographer Giulio di Meo thinks that “photography could be a tool to fight against small and big injustices, small and big daily insults” and that we should try to use photography not just as a tool of information and awareness, but also as a means of involvement and participation in order to realize concrete and solidarity actions. 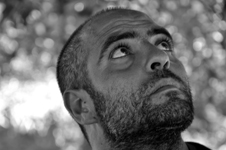 Giulio Di Meo (Capua, 1976) is an Italian photographer active since more than 10 years in photography reportage and teaching.

He organizes meetings and workshops about social and street photography, in Italy and abroad, and workshops for children, teenagers, immigrants and people with disabilities to promote photography as an instrument of expression and integration. He is a freelance photographer , pursuing his own projects independently, not working for agencies or magazines. He is founder of the collective Workshophotolab and editor of Witness Journal, the first online magazine of photojournalism in Italy. He collaborates with various associations and NGOs, particularly with Arci and its ngo ARCS, with which since 2007 organizes photography workshops in different countries in the southern hemisphere (Brazil, Cuba, Saharawi people).

He believes in photography as a tool to inform and denounce, as a means of personal, social and political change. “This is my photography, the one I love and that I like to call social: a photography that is struggle, anger, indignation, but also love, passion, hope… a photography impregnated by an intense humanity.”

He thinks that the reporter should not just inform but should act concretely, being involved in the reality which he represents.

He is working since 2003 on the project Antagonist Reflections about the reality and the exploitation of Latin American countries and from 2006 he is working on Objective Saharawi about the life condition of Saharawi people in refugee camps. Among his reportages there are: Cuban Reflections (2005) shows excerpt of the life on the isle and Between sky and land is about the daily life in the favelas of Rio de Janeiro. In 2007, for the fiftieth of Arci association, he realizes the book Fifty years of sights, a trip through Arci clubs. In 2008 he realizes the works Casa Luzzi, vive (Casa Luzzi, lives) photodocumentary about the squatting of a former hospital in Florence by 350 immigrant families and Street Flowers about the lives of some prostitutes living in Bologna. In 2011 he gets back in Brazil, working on the favela Rocinha in Rio de Janeiro and on the urban occupation of Dandara in Belo Horizonte. In January 2013 he publishes the book Pig Iron, whose pictures tell the story of the serious social and environmental injustices committed by multinational Vale in the Brazilian states of Pará and Maranhão, among the poorest in the country. Thanks to the sales of the book it has been donated, till now, 4.500 Euros in favor of a theatre project led by the theatrical troupe “Juventudes pela Paz”, formed by a group of young people in the city of Açailândia, in northeast of Brazil. He is currently working on two publications coming out before the end of this year, the first on the Sem Terra Movement in Brazil, the other on the Saharawi refugee camps.

Di Meo, over the years, has produced exhibitions, calendars, posters and meetings in order to raise funds for social projects concerned to the realities of his reportages. Di Meo has listened a lot and turned these listening into images, guided by the hope that time and history, that reward only the winners, do not forget the moments passed quietly. To these moments he gave a light, throughout these moments he tries to arouse indignation because of injustices.

Arci Cultura e Sviluppo (ARCS) is the Ngo of ARCI, a national association for social promotion founded in 1957.

ARCS is a non-profit organization of cooperation, solidarity and national and international volunteering, recognized as a non-governmental organization (NGO) by the Ministry of Foreign Affairs. It is also registered in the national register of the associations of social promotion.

It was born in 1985 to implement the mission of Arci in the developing countries: the aim is to support to associations and initiatives of civil society organizations as instruments for the active participation of all citizens, women, children, youth, seniors and immigrants in the life of community through the promotion of all forms of aggregation and civil association.

Cooperation means for ARCS to involvement communities and people, to build relationships between territories through many activities, such as: trade and intercultural dialogue, justice, social cohesion and integration, enhancement and promotion of cultural and environmental heritage protection of the common assets and dissemination of socially sustainable lifestyles, affirmation of the rights of the younger generation, gender empowerment, legality, decent work for a better and peaceful world, centered on the leading role of civil society.

We work in several countries in Europe, Africa, Latin America, in the Mediterranean Basin and the Middle East, with programs and projects of international cooperation and humanitarian aid, promoting awareness raising and public information campaigns supporting themes and activity of education and active global citizenship, international exchanges and volunteering, photography workshops and workcamps.