In Nicaragua, the average lifespan of men who harvest sugarcane is 49 years. At the root of these early deaths is an epidemic known as Chronic Kidney Disease of non-traditional causes (CKDnT). In the town of Chichigalpa, often called the “Island of Widows,” 1-in-3 men, mostly cane workers, have end-stage renal failure from this fatal occupational disease that is both a public health crisis and a social injustice. In Central America alone, over 20,000 sugarcane workers have died from CKDnT in the past ten years. 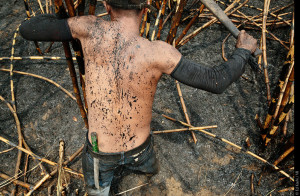 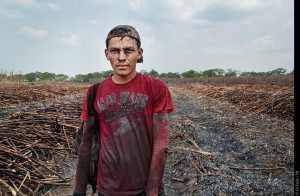 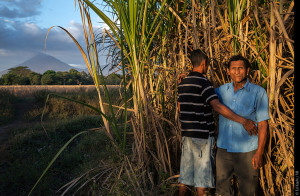 Beyond Nicaragua, the Central American country of El Salvador is also impacted by this epidemic. According to the Center for Public Integrity, CKDnT is now killing more people in Nicaragua and El Salvador – the 2 countries with the highest magnitude of mortality from the disease – than HIV/AIDS, diabetes, and leukemia combined.

Research on the subject of CKDnT indicates that repeated dehydration, severe heat, and environmental toxins might play a huge part in the rising death toll among sugarcane workers. These clues need further investigation and increased media coverage to find solutions to this widespread, critical problem.

With one private sugar mill in El Salvador poised to make history by becoming the site of the first ever CKDnT workplace intervention in Central America, labor conditions have improved due to increased water access, shade and mandatory breaks. However, since this fatal disease is both a global public health crisis and a social injustice, more research and health solutions are essential to continue creating a positive impact in the lives of effected workers, their families, and local communities.

Using the power of photography and video to generate education, support, and community awareness, Kashi states, “My passion and commitment to being a part of positive change, while continuing the drumbeat of awareness, has only grown as I watch another child left fatherless and another family confronting an illness that can be avoided.” 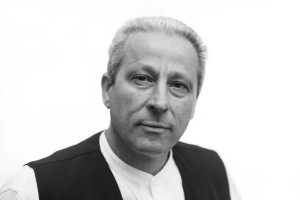 I TAKE ON ISSUES that stir my passions about the state of humanity and our world, and I deeply believe in the power of still images to change people’s minds. I’m driven by this fact; that the work of photojournalists and documentary photographers can have a positive impact on the world. The access people give to their lives is precious as well as imperative for this important work to get done. Their openness brings with it a tremendous sense of responsibility to tell the truth but to also honor their stories. Ed Kashi

Ed Kashi is a photojournalist, filmmaker, and educator dedicated to documenting the social and political issues that define our times. A sensitive eye and an intimate relationship to his subjects are signatures of his work. As a member of VII Photo Agency, Kashi has been recognized for his complex imagery and its compelling rendering of the human condition.
As the photography world continues to evolve, Kashi welcomes the industry’s constant innovations. His early adoption of hybrid visual storytelling has produced a number of influential short films and most recently, earned recognition by the POYi Awards as 2015’s Multimedia Photographer of the Year. Kashi’s full embrace of technology has led to creative social media projects for a range of clients including National Geographic, Open Society Foundations, The New Yorker, and MSNBC. From implementing a unique approach to photography and filmmaking in his 2006 Iraqi Kurdistan Flipbook, to revolutionary Instagram coverage of Hurricane Sandy for TIME Magazine in 2012, Kashi continues to create compelling imagery and engage with the world in new ways.
A leading voice in the photojournalism world, Kashi frequently lectures on a wide range of topics for arts institutions, universities, schools and professional organizations. His work has been published and exhibited worldwide, receiving numerous awards and honors from American Photography, Communication Arts, PDN’s Photo Annual, Pictures of the Year International, World Press Photo, and more. Additionally, his editorial assignments and personal projects have generated seven books, including Curse of the Black Gold: 50 Years of Oil in the Niger Delta, THREE, and Photojournalisms.
In 2002, Kashi in partnership with his wife, writer + filmmaker Julie Winokur, founded Talking Eyes Media. The non-profit company has produced numerous award-winning short films, exhibits, books, and multimedia pieces that explore significant social issues.

Ed Kashi is intelligent, brave and compassionate. He always understands the nuances of his subjects.
He fearlessly goes where few would venture. And he sympathetically captures the soul of each situation.
– David Griffin, Former Visuals Editor, The Washington Post