Giulio Piscitelli - From There to Here

The project “From There to Here, Immigration in the time of Fortress Europe” by Giulio Piscitelli, which started in 2010 and is still ongoing, bears witness to the complexity of the flow of migration toward Europe. The work documents this reality by taking responsibility for retracing and remembering the extent of the geographic, economic, social and political panorama in which this historic event of crucial importance is becoming part. The project broadens the perspective by showing the bigger picture that is too often sacrificed due to the urgency of covering the constant daily reports of the tragic consequences of immigration.
The photographer illustrates all stages of the migrants’ journey and manages to show us with great humanity the magnitude of the collective and individual odyssey these people face.
After a careful and in-depth evaluation, the jury unanimously granted this award.

Immigration to Europe by people from different corners of the world is a phenomenon that has been increasing more and more over the last 30 years, mainly because of the recent political and social upheavals in the Middle East and the sub-Saharan Africa.

What is the current status of the management of migration flows in Europe? What strategies have been implemented to manage – and often to contrast – the phenomenon? What are the results? Europe has the important task of welcoming those who are looking for a safe place to live in: the old continent is surrounded by wars and socio-political upheavals, which are partly the result of wrong Western policies.

The increase in migration flows has not gone hand in hand with the development of policies for the management of this phenomenon. As a matter of fact, in recent years, the EU has often responded by intensifying border controls, detention and expulsion of immigrants. Such management often fails to take account of the basic human rights of those looking for a life far from poverty and war. Before they access the benefits of legal residence in Europe, immigrants face a number of dangers, violence and restrictions on freedom, which act as a “filter”. Only the most resolute are going to be rewarded with a regular residence permit, which often will not be definitive and will not grant to the applicant the same rights of European native citizens. 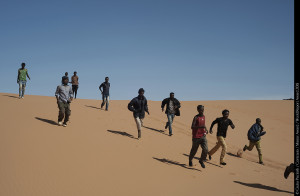 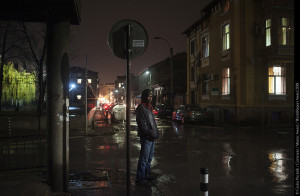 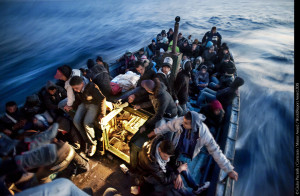 European borders (and European countries too) are filled with refugee camps inhabited by thousands of people waiting to hear about their future; thousands of human beings who have often suffered unprecedented violence as they were trying to reach the European continent. The management of migration flows is often regulated by laws that ignore the reality of the areas where migrants arrive; as the Dublin II, which prevents the lawful movement of those people on the European territory, increasing so the business of criminal groups, who profit on the smuggling of migrants, especially in transit and first reception countries.

In the last four years, the work of documentation of this crisis embraced most of the countries that are affected by this phenomenon; in particular those representing the doors of Europe, such as Italy, Greece, Spain; but also the nations that represent passage territories for people looking for a better life, such as Libya, Tunisia, Egypt, Sudan, Serbia, and Bulgaria.

“From there to Here” is a testimony of this historic period, a visual archive that strives to tell, but whose target is mostly to remember the facts concerning the management of migration flows, explaining through the visual medium of photography the difficulties and the risks that thousands of human beings face to arrive – and live – in Europe. A warning that aims to create awareness in those who govern and in those who are going to enjoy this documentation work, prompting an adjustment to the policies governing access and permanence in Europe; policies that should create secure humanitarian channels for those fleeing from conflicts, repression, or poverty; policies that should give access to a normal and decent life for those who arrive in our countries.

Telling the phenomenon of immigration in recent years means telling the catastrophic consequences of the political and social upheavals that the world is experiencing. It’s important to develop a single, consistent documentation of the phenomenon for the purpose of a collective memory, a story through images that keeps the lights on how Europe has decided to manage and satisfy the requests to access to a better life. Those trying to get there consider Europe as a paradise, but the reality is different, because recently this “paradise” is increasingly becoming an impregnable fortress.

The proposal is to further expand the photographic survey on the route of immigrants that cross the Balkan areas, in particular between Macedonia and Greece (already developed in large part between 2013 and 2014); to develop a report on the internal European border of Calais, where many refugees try to reach the English territory illegally as the current laws don’t allow them to move legally; and to complete the documentation on the under-reported crisis of the refugees in Libya, focusing in particular on the situation of the detention centers for immigrants (developed in large part in 2014).

The photographs will be used for the creation of an interactive map online, that with the geographic coordinates and images, will tell and explain the current situation of migration towards Europe.

Giulio Piscitelli (b. 1981, Napoli), who earned a degree in Communication Studies, approached photography in 2008 and after graduation began working with Italian and foreign news agencies (Controlucepix; AFP).

He collaborated with the historical photo archive Parisio of Naples as post producer of images and archivist until 2010. Some of his works have been exhibited in spaces such as Villa Pignatelli (Naples), University of Catanzaro (Italy), International Festival of Journalism in Perugia, Angkor Photo Festival, Gallery of Brera (Milan); Visa Pour L’Image Festival (Perpignan); Hannover photofestival.

Since 2010, carries out a project on the documentation of the phenomenon of immigration to Europe, work that embraces 10 countries, describing the routes and the reception conditions for the thousands of people who each year seek refuge in our countries. In addition to the project on immigration, he also carried out photographic reports in Syria, Egypt, Afghanistan, Kosovo; Libya, Ukraine, Sri Lanka.

His images have appeared on Italian and foreign newspapers and magazines Piscitelli currently lives in Naples and is represented by Contrasto Agency.