Women’s basketball? In Europe and the U.S., we take it for granted. But: In Mogadishu, the war-torn capital of Somalia, young women risk their lives every time they show up to play. 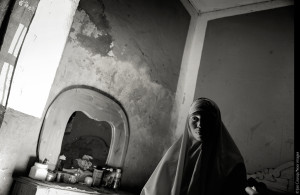 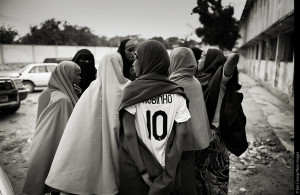 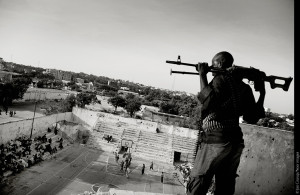 Suweys, the 19-year old captain of the Somali women’s basketball team, and her friends defy the radical Islamist views on womens rights as well as they play the sport of the deadly enemy, called America. This is why they are on the hit list of militant groups such as al-Shabaab, as well as radical Islamists. Al-Shabaab a  recently formed an alliance with the terrorist group Al Qaeda. Even if al-Shabaab was pushed out of Mogadishu in 2011 by the Transitional Federal Government and the African Union troops, the Islamist militants are still present in the capital, hiding among the population. And sadly the women players of the team know this only to well from the many death threats they have received from not only al-Shabaab militias, but also radical Islamists, as well as some male members of their own families.

Al-Shabaab, who sets bombs under market stands, blows up restaurants, and kills journalists and generally follow strict Sharia, has declared the female basketball players „un-Islamic“. One of the proposed punishments is to saw off their right hand and left foot. Or simply: shoot them.

Suweys´s team trains behind bullet-ridden walls, in the ruins of the failed city of Mogadishu – protected by heavily armed gun-men that the somali basketball association pays for to watch over them and protect them from attacks. The women live in constant fear of the militant groups. Stop playing basketball? Never, they say. This is why they have to discreet about their passion. When walking in public to  practice Suweys dresses in her long robe and veil and hides her basketball attire deep in her bag, having people think she is off to school. Despite the dangers Suweys is determined and this is a decision her mother always has supported, even when relatives and neighbors insult them on the streets and they have been forced to move twice in the course of a year.

“I just want to dunk” says Suweys. It is on the basketball court she feels most happy. “Basketball makes me forget all my problems”. That is why when practice is over, it is with heavy steps and reluctantly that she leaves the court to step outside to the world that awaits her in one of the most dangerous cities of the world. Considering that the civil war has ravaged the country for more than twenty year, 19 year old Suweys and her generation have never experienced living in peace. Still she dreams of it, the peace, and of being free to play basketball, then maybe she could have the opportunity to make a career and become a famous player abroad.

Jan Grarup (DK, b.1968) has over the course of his twentyfive-year career photographed many of recent history’s defining human rights and conflict issues. Grarup’s work reflects his belief in photojournalism’s role as an instrument of witness and memory to incite change, and the necessity of telling the stories of people who are rendered powerless to tell their own.

His images of the Rwandan and Darfur genocides provide incontrovertible evidence of unthinkable human brutality, in the hope that such events will never happen or be allowed to happen again. His work, The Boys from Ramallah and The Boys from Hebron, covers both sides of the Intifada expressed through the lives of children coming of age amidst the violence. Grarup’s work takes the viewer to the limits of human despair, dignity, suffering and hope. His images are relevant to us all, because they form a chronicle of the time in which we live, but at times do not dare to recognize.

Grarup has been honored with many of the most prestigious awards from the photography industry and human rights organizations, including: 8 World Press Photo awards, UNICEF, W. Eugene Smith Foundation for Humanistic Photography, Oskar Barnack award,  POYi and NPPA. In 2005 he was awarded with a Visa d’Or at the Visa Pour l’Image photo festival in France, for his coverage of Darfur’s refugee crisis.

Jan Grarup is represented by LAIF agentur in Germany, and is based in Copenhagen – Denmark.