With his reportage “Latidoamerica,” the photographer provides to the public a view of Honduran society where violence is present in every aspect of daily life.
The photographic and narrative style is perfectly congruent with this view into the community and it stops one’s breath. The narrative creates an obsessive repetition of extreme situations that generates pathos and dismay.
The jury distinguishes the photographer for his ability to describe this reality, facing situations in which his own safety was at stake. This is an example of “live coverage” photojournalism that makes courage the base for witnessing social phenomena as extreme as these.

Section in collaboration with PHOTON Festival.

My project aims to document the axis of uncontrolled violence in Honduras and the way social and political factors are feeding more and more aggressively on such violence. I have been working in Central America for more than five years documenting the transformation of their society and I have been fighting to create awareness about the disastrous policies to end the violence. I would like to continue working on new themes to make people think and on stories that could highlight gender violence and intolerance towards disadvantaged groups such as homosexuals or transsexuals, who constantly suffer from episodes of violence and mistreatment. 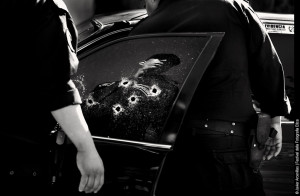 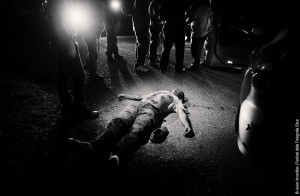 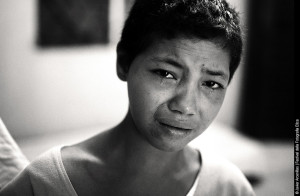 Honduras is considered one of the most violent places on earth. Every day on the streets of cities like San Pedro Sula or Tegucigalpa, murders, robberies and violence are more and more present. Politics in the area is unstable and ineffective, traffic of drugs into the USA is uncontrollable and insecure neighborhoods of Maras or control of the Zetas border is the closest thing to a daily war. The report of the Organization of American States emphasizes that in a country like Honduras violent death occurs every 74 minutes although the country is not at war. In 2011 it was already the most violent nation in the world with 7,104 murders documented by police. In these places the use of youth and children to be trained as sicarios is a regular job. They are attracted by the possibility of making money easily and to be respected and feared. This young killers from the most consumed strata of society become true harbingers of death.

The social portrait of Honduras makes it one of the most terryfing places in the world. After the coup in 2009 that overthrew President Manuel Zelaya by Roberto Micheletti, violence has put the country in a state of permanent despair. In 2008, 3,418 people died, according to a tally of the Honduran newspaper «El Heraldo». The homicide rate per 100,000, which in 1999 was 42.1, is now 86, almost eight times what the World Health Organization considers an epidemic. The world average is 8.8. 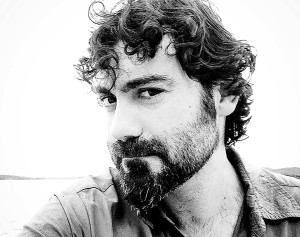 Humanist, Psychologist at the Complutense University of Madrid, Javier Arcenillas teaches photojournalism and documentary photography at the International School PICA. He develops humanitarian essays where the main characters are integrated in societies that borders and sets upon any reason or human rights in a world that becomes increasingly more and more indifferent.

Along these years, he has achieved projects on Latin America like “Territorios”, in Jamaica, an assignment that approaches the “Traffic of Marihuana” or the Boxing Olympic School in La Habana. His most recent assignments are with Médicos del Mundo on the Garbage Dump Cities in Central America, the question that City Hope publishes the book about. He also has a book on society portraits pictures, summarizing his daily activity in magazines, titled REVOLUZION, besides a photographic essay on charity in India titled Kingdom Charity. His most complete news articles outside Spain can be read in Time, CNN, IL Magazine, Leica Magazine, Der Spiegel, Stern, GEO, National Geographic, Le Monde 2, El Mundo, El periódico de Guatemala as most important magazines.

At the moment, he arranges Humanitarian Photographic assignments with diplomatic matters in his country. The final reports and publications can be seen in Esquire Spain on the websites fronterad and soy502.