All that happens must be known? Yes, if we are talking about news. This has been Massimo Sestini’s belief for about thirty years. And this kind of existential credo, apparently lacking any noble justification and even morally questionable, made him become the photographer of the exploit. The impossible witness: our party crasher in History.

In the past thirty years Sestini recorded decades of European history with his photographs, from his first famous scoops (Licio Gelli arrested in Switzerland, Lady Diana wearing a bikini, the images of the blasted Train 904), to the recent reportage on the migrants rescued off the Libyan coats. In order to cover all great events, Sestini experimented with every kind of photography, but he remained faithful to a principle: being there. He has always provided firsthand information regardless of the costs. Whether that meant receiving a legal complaint, spending days hidden on a tree, using cameras hidden behind a tie, in a bag, in a vase of flowers relying on remote- controlled devices. 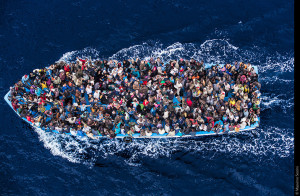 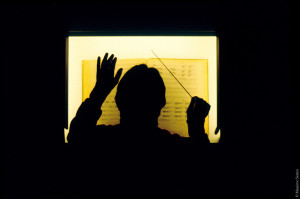 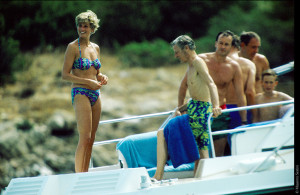 Professional obligation together with a sense of insecurity – which turned into perfectionism – made him a free photojournalist. This lead him to make no distinction. The concept of ‘paparazzo’ became so wide as to include an absolute principle: to unveil that portion of reality that risked to be concealed to the majority of people.

So Massimo Sestini’s retrospective is a journey in the backstage of the Italian political power, in the control room of the country, based on the most tragic, grotesque, significant or dark events of the past 30 years. The exhibition features Sestini’s most renowned works: stolen photographs taken inside the Italian Parliament of the first Berlusconi government, the exclusive pictures of the Genoa G8, the photographs of the assassinations of judges Falcone and Borsellino, the shots of inaccessible wedding parties of celebrities; Riccardo Muti’s portrait taken while he was conducting “la prima” at La Scala Theatre in Milan, the photographer hidden in the big chandelier.

Sestini’s career is strictly influenced by his relationship with Italian and international magazines. The obligation he felt to cover the most relevant news, lead him to adopt any unusual trick to get close to the events. Paradoxically, his favourite one has been aerial photography: for the past 20 years Sestini has been flying over people and events.

His aerial photographs, taken from great distance, got him much closer than anyone else. When taking a portrait, Sestini has proved to be impartial and strict: every famous character has no choice but to play himself, as honestly as possible, and with no ‘discount’. So President Ciampi couldn’t possibly be portrayed in any other way but riding a bicycle, Emilio Fede while stumbling; people are shown naked, sitting on the toilet or on top of a 60 meters tall mast of a sailboat. Massimo Sestini has been impartial also with himself. Just look for him in the photographs exhibited. 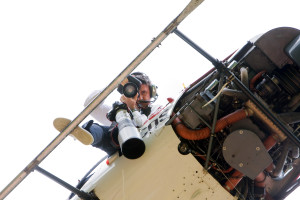 Massimo Sestini was born in Prato (Florence) in 1963. Self-taught, he started taking pictures in high school, photographing rock concerts and the news for local papers.

His first scoop in mid Eighties: the image of the Train 904 bombing achieved him his first cover on Stern. He then founded Massimo Sestini News Picture to cover local news, and started focusing both on great news and on celebrities’ private life stolen images. It’s the beginning of his career as paparazzo, but the approach to photography remained the same: covering the news, by being there.

He then worked for the most important agencies and newsmagazines. Aerial pictures became a regular feature: the 2000 Jubilee, the G8 in Genoa, the funeral of Pope John Paul II.

Since 2007 he has worked as an advisor and collaborator to several institutions. In 2012, he dived with the Italian Police in the Costa Concordia that had just sunk. He then worked for the Italian Navy on the project Un Sogno lungo 100 giorni.

In 2014, he was aboard the “Bergamini frigate”, to follow the rescue operation Mare Nostrum off the Libyan Coasts. His picture from the helicopter of boat of migrants won him a 2015 Word Press Photo in General News Category.