Helmand is one of the provinces most severely affected by the on-going -sometimes raging conflict. The population, especially in the districts, has to deal on a daily basis with landmines, bombs, active fighting and the risk of being caught in crossfire. However, not all casualties of the war are caused by bullets and bombs. 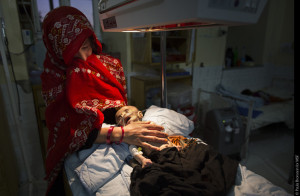 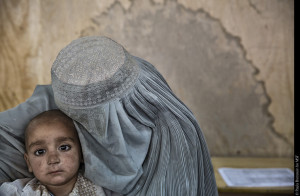 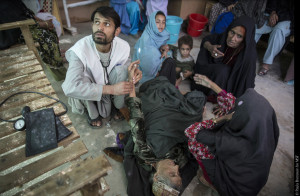 Because of the insecurity on the roads, patients wait more than a week before seeking care for their condition until their medical condition had deteriorated to the point of endangering their health or even lives.

In the over-crowded 40 beds Intensive Therapeutic Feeding Centre of Boost hospital, supported by MSF, the consequences of such a delay are staggering. Children arrive to Boost hospital in very late stage of their sickness in sepsis or septic shock and suffering from severe malnutrition – one of the biggest causes of mortality for children. In the summer of 2014, during the so-called “fighting season” and while malnutrition is virulent, MSF received up to 267 children a month.

Paula Bronstein’s many nominations and awards span decades and represent only a small space in what is simply a lifetime ofphenomenal frontline news and documentary photography across the globe. She sits alongside the most important female photographers of our time, as a multiple nominee and award winner of contests including The Pulitzer, Pictures of The Year International, The National Press Photographer’s Association and most recently Days Japan. She has judged for The World Press Photo Award, exhibited extensively, and given interviews herself for the media in the US, Australia, and across Asia. Paula worked as staff for major US newspapers including The Hartford Courant and The Chicago Tribune before moving overseas to Bangkok.
She then went onto working for Getty Images as a staff photographer for over a decade. Paula’s images have been published in almost every globally recognized publication. Her work reflects a dedicated humanitarian and visual war correspondent finding moments nobody else would dare look for.
She continues to photograph presidents and kings, natural disasters, political turmoil and conflict, and always the most impoverished and vulnerable people on this earth, from Mongolia to Afghanistan and Africa. Paula is currently freelance, represented by Reportage / Getty Images.

Our actions are guided by medical ethics and the principles of neutrality and impartiality.

A worldwide movement, MSF was founded in Paris, France in 1971. Its principles are described in the organisation’s founding charter. It is a non-profit, self-governed organisation.

Today, MSF is a worldwide movement of 24 associations, bound together as MSF International, based in Switzerland.

Thousands of health professionals, logistical and administrative staff – most of whom are hired locally – work on programmes in some 70 countries worldwide.