The Ku Klux Klan (KKK) is a white supremacist group in the United States advocating a platform of white nationalism, anti-Catholicism, anti-Semitism, and anti-immigration. Black Americans have typically been their biggest target. It was founded in the wake of the Civil War in an attempt to overthrow Republican governments (the party of Abraham Lincoln) in the South. It quickly died out, but re-emerged in 1915. and in the 1950’s. This current iteration has never grown beyond approximately 5,000 members, and has no central organization or leadership structure. There are no precise figures for Klan attacks, but it is known that between 1882 and 1968, 3,446 black Americans were lynched by whites. 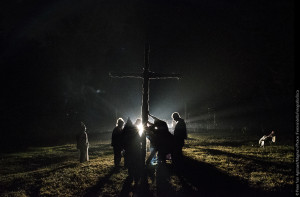 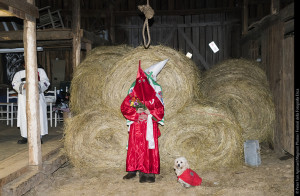 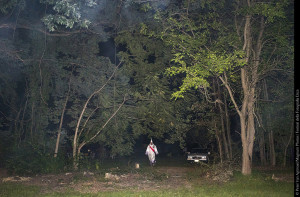 I was introduced to the Klan by the Norwegian writer Vegas Tenold. For the past ten years, I’ve been working on subjects of American history, conflict, race, class and social justice issues, and the KKK seemed like the perfect intersection of all of these interests.

We attended several gatherings. The first was a cross burning (or cross lighting) in rural Maryland, my home state. The KKK had boasted that dozens from their Klan chapter would attend the rally and cross lighting, but there were only a few people when we showed up, including a British TV crew and a freelance photographer. After a few vague excuses about the small turnout, the Klan members changed into robes and began the rally. After dealing with a PA system, one of the leaders began to rant against the United Nations, claiming that they were conspiring with FEMA (Federal Emergency Management Agency) to host ISIS training camps whose fighters would then take American’s guns away. This plan was allegedly hatched by Barack Obama (or Barry Soetoro as he was referred by the Klan. Soetoro was the surname of Obama’s stepfather and that he was briefly called Barry Soetoro in elementary school has been used as evidence that Obama was not born in America). After finishing the rant, the hoarse-voiced Klan member burned the UN flag and stomped on it, to the tepid cheers from the small crowd.

The most interesting gathering we attended was the wedding of two Klan members. Both had several generations of Klan ancestors, and they saw themselves as carrying on a family tradition. The wedding took place at a house deep in rural Tennessee. When we arrived the bride and groom went for a wedding lunch at Arby’s, a fast food restaurant. The groom had several work-related injuries that compromised his ability to work manual labor, and his ability to find a steady job was a great source of anger and resentment. Although he blamed blacks and immigrants for taking his job opportunities, Vegas (the norwegina writer I’ve worked with) pointed out to him that economically marginalized minorities had the same problems as him, and that his anger should be a class issue more than a race issue. After lunch we headed back to the barn and the ceremony got under way. The groom wore a white robe and the bride a shiny red one. They draped their dog, Leroy, in a little Klan robe. It was affixed with a patch that read “White Power.” The wedding took place in a barn in front of a small shrine.

After the short ceremony, the gathering celebrated with a small supermarket cake, and proceeded to the large lawn to burn the cross. Cross burnings by the Klan originated in the early 20th century when they would burn them near the homes of people they wished to intimidate. Although many Christians consider burning a cross sacrilegious, the Klan see it as a symbol of the members’ faith.

We left shortly after the burning and I haven’t been back since. Although the violence and hatred of the KKK is an important part of American history, contemporary forms of racism are generally far more insidious and institutionalized. The KKK is a conspicuous visual symbol but ultimately is now a marginalized group. 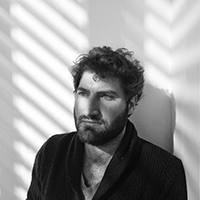 Peter van Agtmael was born in Washington DC in 1981. He studied history at Yale, graduating with honors in 2003.

His work largely concentrates on America, looking at issues of conflict, identity, power, race and class. He also works extensively on the Israel/Palestine conflict and throughout the Middle East.

His book, ‘Disco Night Sept. 11′ on America at war in the post-9/11 era was released in 2014. Disco Night Sept. 11 was shortlisted for the The Paris Photo–Aperture Foundation PhotoBook Awards and was named ‘Book of the Year’ by The New York Times Magazine, Time Magazine, Mother Jones, Vogue, American Photo and Photo Eye.

“Buzzing at the Sill” a book about America, will come out in Fall 2016.