“Flash Points” is a selection of images that examine the intersection between communities and an increasingly militarized American police force. 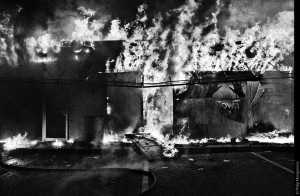 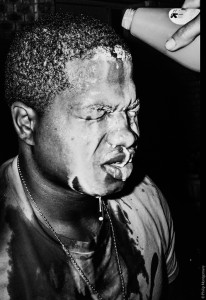 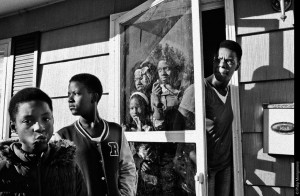 “Americans have, at this juncture in our history, become accustomed to conducting our most painful reckonings in public. The balcony of the Lorraine Motel, Dealey Plaza, the kitchen of the Ambassador Hotel, and a forsaken driveway in Mississippi occupy a profane corner in the minds of a generation of Americans. Yet the geography of conflict extends well beyond the locales where Martin Luther King, Jr., John F. Kennedy, Robert Kennedy, and Medgar Evers perished.

There are lesser-known addresses: the street corner where residents are routinely stopped and frisked, the side of the road where a driver is detained for a minor violation. These are the less visible conflicts that cumulatively become something volatile. Fifty years ago this week, President Lyndon B. Johnson signed the Voting Rights Act into law, a piece of legislation that was hailed as a hallmark of racial progress. Five days later, a police traffic stop in Watts, California, detonated five days of riots that left thirty-four dead and cleaved the city’s history into the era before the fires and the years that succeeded it. The theatre of revolt that was staged in the streets of Watts became a redundant feature of the period, with successive explosions taking place in many other American cities before the end of the decade.

That history, despite whatever efforts were made, has not been interred in the past. The photographer Philip Montgomery was born in 1988, twenty years after the assassination of Martin Luther King and the wake of fire that his death brought about. Yet Montgomery’s images convey an elemental historical quality—familiar in the way of the angry imagery from Watts, Newark, Harlem, Detroit, and the other flammable precincts of the late sixties. These new photos capture recent events in Baltimore, Maryland, in Ferguson, Missouri, and in Newark, New Jersey, where Montgomery shadowed police officers in order to study the department’s use of stop-and-frisk. But his images from these three cities feel interchangeable, not just geographically but temporally as well. Canfield Drive in Ferguson and Presbury Street in Baltimore are reference points in a much longer lineage. (That we could easily add Sanford, Florida, Cleveland, Ohio, Charleston and North Charleston, South Carolina, and Staten Island, New York, to this list of racial flash points establishes just how redundant this phenomenon is.) Montgomery’s photographs capture the humanity of people for whom this lineage is not an abstract concern.

A young man stands in the middle of the street during a storm, his gaze focussed somewhere far behind the lens. What fear animates the expression he wears? Here is a different man who has been stopped, but “frisk” is the grossest of misnomers for what is being done to him. These are not disjointed moments bound by a single artist’s perspective. These are stations in an American crucible.” 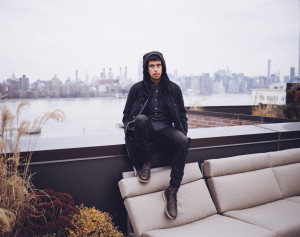 Originally from California, Philip Montgomery (b. 1988, USA) is a New York City based photographer. He is a graduate of the Photojournalism and Documentary Program at the International Center of Photography. Philip is a regular contributor to publications such as The New York Times Magazine, Harper’s, The New Yorker, Bloomberg Businessweek, and The Atlantic Magazine. Philip’s work has been exhibited at the Annenberg Space for Photography in Los Angeles, the City Museum of New York, and the International Center of Photography in New York. In 2015, Philip was named as one of PDN‘s 30 Emerging Photographer and was awarded First Place in the features category in Pictures of the Year International, NPPA Best of Photojournalism, American Photography 31, and PDN Photo Annual.
Website: www.philipmontgomery.com