Once, for the briefest time, I was shackled. Within minutes the cold metal cuff was rubbing the skin around my ankles raw. How many millions before me have been surprised by how quickly these dull metal objects cut? For the first time I realized how much I valued the freedom I had taken for granted all my life. 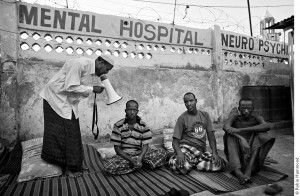 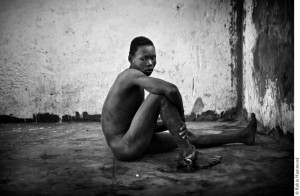 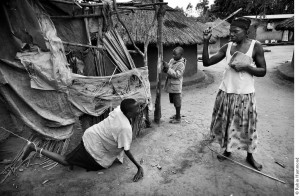 Many of the people in this exhibition have never known that sense of liberty. The societies and institutions in which they live have condemned them to lives in chains. Their crime was to have a mental disability in countries in war, in families seeking refuge, or in states wracked by greed and corruption.

The restraints are not always physical; discrimination, neglect and the failure or absence of policies to assist those with mental disability can be just as harmful.

Suffering can be endured where hope exists. I knew I would be released from my shackles, that eventually my liberty would be returned. Alas, for the many people I met with mental disability, there is little hope. The dearth of people: politicians, heads of psychiatric institutions, charity workers, human rights activists, religious leaders, willing to act on this issue has filled me with great frustration. The saddest part of making this work is knowing that if you go to the places where I met these people, they will still be there, the same rope knotted around their ankle, the same nightmares waking them at night, that is, if they have not died.

Many incarcerated and neglected people with mental disability are capable of articulating their suffering. Yet they are not allowed to advocate for themselves – after all, they are ‘crazy’.

The real insanity, though, is that people with liberty and power allow their suffering to continue. 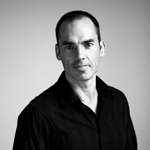 The winner of four Amnesty International awards for Human Rights journalism, Robin Hammond has dedicated his career to documenting human rights and development issues around the world through long term photographic projects.

In 2011 Hammond won the Carmignac Gestion Photojournalism Award which allowed him to continue documenting life in Zimbabwe under the rule of Robert Mugabe. The work culminated in an exhibition in Paris and the publication of his first book ‘Your Wounds Will Be Named Silence’. The work went on to be exhibited at Le Recontres in Arles, France in July 2013 and in Milan, Rome, and Cologne and was featured in National Geographic Magazine.

In 2013 he won the FotoEvidence book award that will result in the publication of his long term project on mental health in Africa, Condemned. The same body of work was exhibited in September 2012 at the photojournalism festival Visa Pour l’Image. In 2013 it will be exhibited in New York, Italy and Belgium.

Born in New Zealand, Robin has lived in Japan, the United Kingdom, and South Africa. He is currently based in Paris.